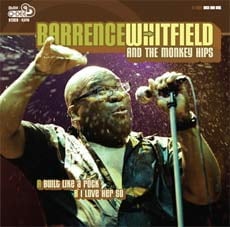 The latest single by Boston-based veteran soul-rocker Barrence Whitfield and his band, the Monkey Hips, features not one, but TWO covers of songs by the late, great Cropseyville rockabilly rebels, Rocky Velvet.

The brand new single – featuring the tunes “Built Like a Rock” and “I Love Her So” – has been pressed in a limited, individually numbered edition of 500 on yellow vinyl by the fine folks at Q Division’s Q-Dee Records. The tracks were produced by Ed Valauskas, and the seven-inch single was released two weeks ago.

You can order the vinyl or digital versions of the single at the Q-Dee website, where you can also stream the tunes for your listening pleasure.

So what’s the connection between Barrence Whitfield and Rocky Velvet? Well, that would be bassist Jim Haggerty. The Delmar native and longtime veteran of the Nippertown music scene was a member of Rocky Velvet before relocating to Boston several years ago and joining Whitfield’s Monkey Hips.

Haggerty was back home in Nippertown in May, playing with Roy Sludge as the opening act for Peter Wolf at The Egg and then playing a Rocky Velvet reunion in Albany’s Washington Park for the benefit of Tess’ Lark Tavern the next day.

ArtBeat: The Fence Select Show @ the Arts Center of the Capital Region