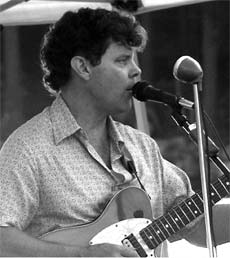 1. THE FIRST ALBUM I EVER BOUGHT WAS … “Sgt. Pepper”
2. THE FIRST CONCERT I EVER SAW WAS … Buffalo Springfield (I was 10.)
3. THE FIRST INSTRUMENT I EVER OWNED OR PLAYED WAS … Fender acoustic
4. THE FIRST SONG I EVER PERFORMED IN PUBLIC WAS … I seem to have blocked that out.
5. THE FIRST BAND I WAS EVER IN WAS … The Pirana Brothers (with two of the Providers)

As part of Albany’s First Friday arts walk, Mark Calkins and the Providers will be playing at the Broadway Art Center at 6:30pm on Friday in conjunction with an exhibit by the East Bank Art Alliance. The band will also be performing at American Glory in Hudson at 8:30pm on Saturday. Admission is free for both performances.