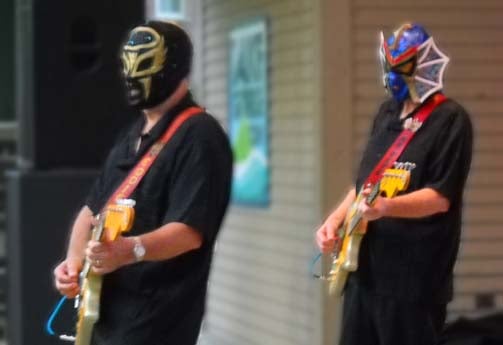 Eddie Angel was twangin’ around Nippertown with a parade of rather diverse bands – Swump Road, the Star Spangled Washboard Band, Tino & the Revlons, Barbara & the Idiots, Rockin’ Dakotas and lots more – before heading down to Nashville with Jeannie Smith & the Hurricanes.

When that band called it quits, Angel stayed in Music City, and after a stint with the Planet Rockers, eventually put together a retro-rock instrumental combo that pumped out surf ‘n’ twang classics – both originals and catalog hits – wearing wearing Mexican wrestling masks. The band was, at least partly, just a fun goof.

But it was a goof that stuck. Now 15 years after the release of their debut album, Los Straitjackets have toured the world, recorded more than a dozen albums, and they’re still going strong.

A recent diagnosis of cancer has sidelined Danny Amis, the band’s co-founder and Angel’s co-guitarslinger. But at Shepard Park in Lake George last Thursday, you’d never have guessed that Amis’ replacement – Greg Townson of the Rochester band, the Hi-Risers – had been playing with Los Straitjackets for less than a week.

The tight instrumental foursome launched the show with “Outta Gear,” but they were in high gear throughout their two 55-minute sets, blitzing through nuggets like “Calhoun Surf,” “Cal-Speed” and “Tailspin” without missing a lick.

Amis had always been the band’s frontman, delivering between-song patter in Spanish. Los Straitjackets cleverly covered that aspect of the show by dropping in recordings of Amis’ Spanish spiel while the bandmembers quizzically scanned the stage for the source of the disembodied voice.

But it wasn’t all four-on-the-floor, garage-rockin’ surf ‘n’ twang. The band can play it pretty when they want to as evidenced by their luscious readings of Angel’s “University Boulevard,” Santo & Johnny’s “Sleepwalk” and a very tasty selection of movie themes, including “A Summer Place” and “Midnight Cowboy.”

Speaking of cowboys, their spin through “The Theme from Magnificent Seven” was a western whirlwind. They got funky with the Bar-Kays’ “Soul Finger,” and they jazzed it up, too, swinging mightily through the classic Gene Krupa drum sizzle showcase, “Sing, Sing, Sing.”

As always, Los Straitjackets kept the crowd thoroughly entertained, kept the dance floor hopping and kept churning out one snappy tune after another – nearly three dozen of ’em.

And, of course, we wish a speedy recovery to Danny Amis… 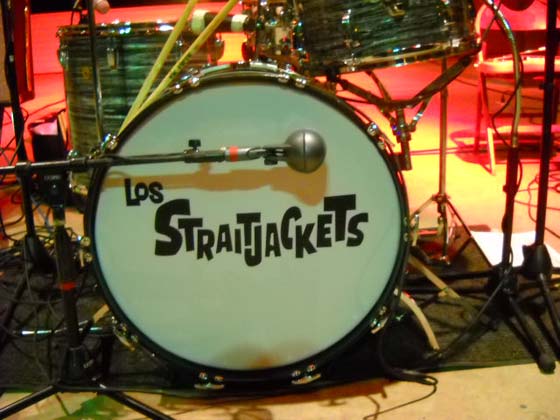