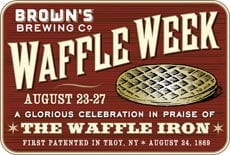 Welcome to Waffle Week, a five-day celebration commemorating the patent of the first waffle iron right here in Troy.

Yes, on August 24, 1869, the heretofore unheralded Cornelius Swarthout of Troy was awarded the very first patent for the waffle iron. (For more information on the history of waffles, please consult Mr. Breakfast or JitterBuzz, who also explains the connection between waffles and swing dancing.)

Anyway, in honor of this erroneously overlooked moment in gastronomic history, Brown’s Brewing Company in Troy is hosting its first ever “Waffle Week: A Glorious Celebration in Praise of the Waffle Iron.” Beginning today, Brown’s will offer a different specialty waffle each day – all made with one of Brown’s own tasty ales and lagers.

And to truly celebrate the occasion, Brown’s is featuring a famous Waffler in history to represent the dish of the day. We couldn’t explain the menu any better than Brown’s own press release, so here it is verbatim:

Today (Monday): The Joe Lieberman
Democrat. Independent. John McCain for President endorser. What’s your party, Joe? Not sure, but what is sure is that this waffling Senator is from the Nutmeg State of Connecticut. And to salute him, we offer a Brown’s Porter-Sweet Potato/Nutmeg Waffle with a Whisky Syrup.

Tuesday, August 24 (National Waffle Day): The Brett Favre
Packer? Retired? Jet? Retired? Viking? Retired? Sure we love Brett. At his age, he’s an inspiration to any of us former athletes over 40. But what’s his deal? Is he in or out? We do know that Brett is from the Bayou country, and our Chef Paul Brett has concocted a snappy Cajun Creole Waffle seasoned with Old Bay and topped with a
Crayfish/Andouille Sausage Etoufee made with our Brown Ale.

Wednesday, August 25: The Arlen Specter
Yet another waffling politician? Sure! This Oklahoma born Senator from Pennsylvania began his career as a democrat, then became a Republican and recently jumped the G.O.P. ship to become a Dem again in order to save his job. Last we heard, he’s not leaving the Keystone State, so we’re dishing up a tasty tribute to Pennsylvania
Dutch Country with a rich Oatmeal Stout Dark Chocolate Waffle topped with a White Chocolate Syrup and Cinnamon Whipped Cream.

Thursday, August 26: The Bill Parcells
We love Bill. One of the greatest coaches in the history of pro football … he’s even led one or two or three of our area’s favorite teams, the Giants. And the Patriots, no, wait the Jets. Then the Patriots. Then the Jets. Then the Cowboys?! AFC, NFC, Inter-division rivals? We love ya, Big Tuna. Hope all’s well in Miami. This waffle is lovingly made with our Hefe-Weizen and a Tuna Nicoise Motif.

Friday, August 27: The Benedict Arnold
To conclude the week, we commemorate our nation’s greatest Waffler of all time – Benedict Arnold. Continental Patriot. British General. Traitor. Arnold set the standard for waffling in America – and for that, we tip our iron to him with a serving of an Eggs Benedict Waffle, complete with a Tomhannock Pilsner infused waffle topped with a Poached Egg, Canadian Bacon and our Tomhannock Pilsner
Hollandaise.

Important note: references to political and sports figures are intended for the spirit of fun and are in no way meant to offend, incite angst or otherwise cause fodder for scathing public outcry.