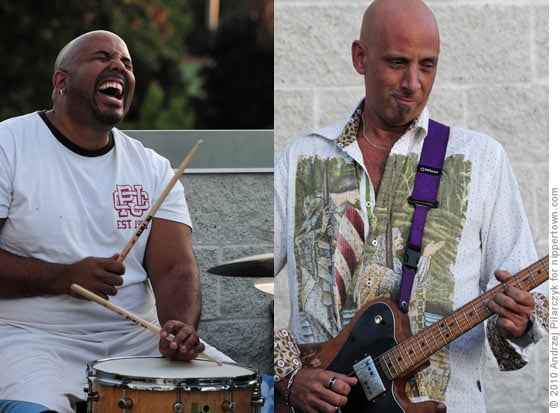 When blues-funk-classic rock band the Blue Olives, rolled into the Tang’s parking lot on the Skidmore College campus on Friday night, the audience was already waiting for them on the roof of the museum.

The slightly embarrassed group members, their equipment and a few last-minute stragglers rode up together to the third floor to quickly set up in the unique open-air performance space.

Within minutes the band members were behind their mics and ready to perform. It may have seemed a bit unprofessional of them to be late, but as lead guitarist Dave Turner explained to the audience, they had just driven 18 hours straight from Wisconsin to make the gig.

Things like that happen. And once the band got started and kicked into gear, the music was happening, too.

Electric bassist Johnny Payne sang with a big soulful voice, as drummer Ron Tuttle nailed down the propulsive percussion with timepiece accuracy. Keyboardist and back-up vocalist Todd Phipps added some sparkling melodic flourishes to the group’s mix of originals and covers, mostly in the vein of Marvin Gaye, Maceo Parker and Blood Sweat and Tears with a little 1970s-era Chicago thrown in for good measure.

With three CDs under their belt (“Marmalade,” “Juice” and “Ripe”), the Blue Olives’ mid-western brand of R&B and funk-rock was plenty of fun. Where they a great band? Well, they still have a ways to go before they become seasoned openers for national acts or headliners in their own right. But as a crowd-pleasing bar band – complete with dancing and drinking – they would have killed at Gaffney’s or the Putnam Den.

The Tang’s annual Upbeat On The Roof free summer concert series wraps up at 7pm on Friday with a sure-to-be-swingin’ Travers Eve performance by Doc Scanlon’s Rhythm Boys with special guest Jonathan Russell on violin. Admission is free.