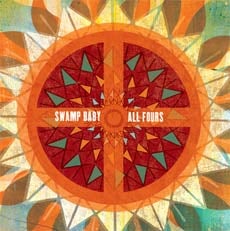 Sometimes Swamp Baby sounds like Gram Parsons on quaaludes with the volume turned down to three.

Now, some bands might be pissed off with a comparison like that, but I’m guessing that Swamp Baby isn’t one of them.

And I certainly don’t mean it in any kind of a derogatory sense at all. I like Gram Parsons. And quiet music. And ballads, too. Although you can keep the quaaludes.

The music has an appropriately swampy sound that swirls and drifts between your brain synapses like it’s perpetually 3am. Smokey sounds that curl around your ears like wisps from Lucky Strikes and then fade away into nothingness.

The music is so translucent, so evanescent, so utterly ephemeral that it seems as though it might completely evaporate into sweet silence at any moment.

The band’s website says that there are three hidden bonus tracks, in addition to the 10 songs listed, but they must be very well hidden indeed. I’m sure they’re lovely, even though I haven’t heard them. Not that I’m complaining about being short-changed – not by any means. This Swamp Baby debut sounds just perfect the way it is.

Swamp Baby is slated to make a rare live appearance on day two (Sunday) of Rest Fest at St. Joseph’s Church in Albany. Admission is $15.