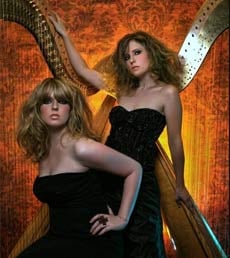 Yes, there are a lot of cool shows on tap this week, but when it comes to just plain strange – and you know how much we here at Nippertown.com love all things strange – this one is the hands-down winner.

Harptallica – just in case you haven’t already guessed – is a pair of lovely young women who play harp. Not the blues harp. Or the jaw harp. They play the harp – the classical harp.

Ah, yes, but they don’t play classical music. Instead, they perform selections from the Metallica songbook. That’s right, Metallica songs as performed on two classical harps.

Harptallica started in early 2006 when Ashley Toman – a graduate student at the Eastman School of Music – decided to arrange the Metallica song “Fade to Black” for two harps. Somehow, this turned into nine Metallica songs, which were recorded on their self-titled debut CD in 2007.

Since then, the duo – which features Mollie Marcuson in the second harp chair – has branched out and now also covers works by Black Sabbath, Megadeth and Iron Maiden.

Harptallica is slated to perform at the Judge’s Inn (Facebook), 254 Broadway, Troy at 8pm on Wednesday. Admission is $10. It’s their only show in the northeast.