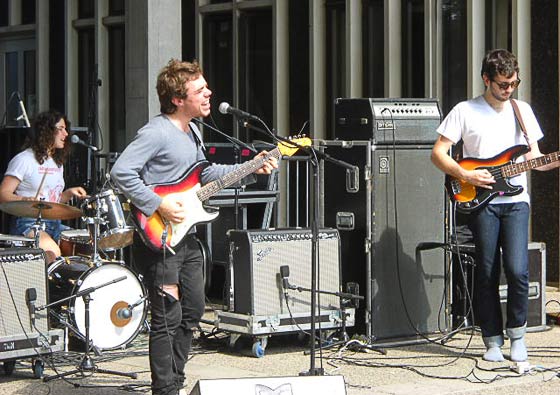 It was the first week of classes at UAlbany last week, and the school’s University Auxiliary Services was testing out its social media muscle. Sign up to follow their Twitter account, and you’ll be rewarded, they promised.

First up on their agenda was a semi-secret, surprise concert by California indie-pop trio Avi Buffalo. Here’s the Twitter history of the info roll-out concerning the concert:

8:06pm August 25:
Sub Pop recording artists Avi Buffalo’s new album is gorgeous, and they’re LIVE on campus next week. Only WE have the scoop on when & where!

5:34pm August 26:
Welcome & welcome back! We have some amazing stuff planned for ya, starting w/these guys LIVE on campus: http://www.myspace.com/avibuffalo

UAlbany’s first big Twitter-fueled flash event might not have been a rousing success by the numbers – there seemed to be only about 60-70 students in attendance – but it was a mighty fine concert. And a great way to start the new school year off with a bang.

“We’ve never done anything like this before. It’s really intense for us,” explained 19-year-old Avi Zahner-Isenberg, the band’s singer-guitarist-bandleader, before launching into “Can’t I Know?” from their self-titled debut album on Sub Pop Records.

Avi Buffalo was one of the most buzzed-about bands at Wilco’s recent Solid Sound Festival at MASS MoCA in North Adams. And after the UAlbany show, they were headed to the All Tomorrow’s Parties festival in Monticello, where they were rubbing elbows with the likes of Iggy & the Stooges, Sonic Youth and Mudhoney.

Obviously, they’re rapidly climbing up the ladder of rock ‘n’ roll success. In the meantime, however, they were playing in a college dormitory courtyard in the middle of the afternoon in the scorching heat. They did plenty of their own scorching, too.

Zahner-Isenberg is a truly amazing guitarist, and there’s no disguising the fact that he’s a big fan of Wilco’s adventurous axe-master Nels Cline. He can play pretty when he wants – “Can’t I Know?” and “Margaux” – but he really loves to skronk out, and despite his youthful years, he does it with the best of them.

His singing may be the deal breaker, however. He sings everything in a kind of cracked falsetto that I found to be quite endearing wrapped around his fractured pop songs of teenage love and lust. But I can also see that his voice might be more annoying than fingernails on a chalkboard to other ears.

His rhythm section – drummer Sheridan Riley and bassist Arin Fazio – held their own, providing a solid foundation for Zahner-Isenberg’s sonic explorations to run rampant. But they certainly weren’t on the same level as the guitarist when it came time for them to leap off into more experimental territory.

Still, the band rocked. They took on the classic rock form with “We Can’t Try This Again,” which had a Stones’ “You Can’t Always Get What You Want”-vibe, but then they threw in a curve ball with a Zahner-Isenberg/Fazio mid-song whistling duet.

By the end of the show, Zahner-Isenberg was down on his hands and knees, twiddling knobs and smacking effects pedals, filling the quadrangle with a feedback-fueled electronic universe of sound.

And, oh yeah – not only did University Auxiliary Services sponsor the free concert, but they also provided free soda, bottled water, pop and neon-blue cotton candy. Dinner and a show. You can’t beat that.

LIVE: “Sing in the Streets” Festival @ Caffe Lena (and…