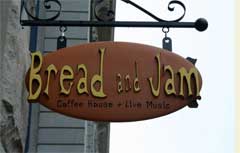 Last Friday, Sal Prizio rather abruptly closed his Bread & Jam Cafe in Cohoes, just a week before the cafe was to celebrate its second anniversary with a big concert at the Cohoes Music Hall. In these troubled economic times, it’s no surprise that an intimate live music venue like B&J would be experiencing financial hard times.

But it seems that there was also another factor in his decision to close the cafe. Prizio had just been selected as the new Director of Programming at the College of St. Rose’s Massry Center.

A staunch supporter of the local music scene – especially in the areas of jazz and singer-songwriters – Prizio will now have a bigger better venue to showcase some of that talent.

The Massry Center is slated to host a concert by New Orleans veteran Preservation Hall Jazz Band on Tuesday, October 26.

Thanks to Sal for all his hard work at the Bread & Jam, and congratulations on the new job.