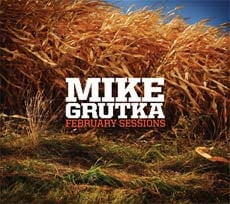 On his previous album, “Ria” (which was officially released just a couple of months ago), Saratoga Springs singer-songwriter Mike Grutka did it all himself – singing, songwriting, playing all the instruments, producing, etc. – and he very nearly pulled it off.

This time around, he did the same thing, except that he brought in drummer Will Railton on two-thirds of the tunes. It was a smart move that makes all the difference on this batch of 11 impressive original songs. No question about it, this is Grutka’s best work yet.

Titled “February Sessions,” the album was written and recorded during February, 2010, as part of the annual RPM Challenge in which bands and musicians attempt to create an album’s worth of music from scratch during the shortest month of the year.

The lone exception to the RPM Challenge restrictions is the album’s closing track, “Lullabye,” which was recorded live at WEXT-FM. Sonically, it’s a different animal, but it neatly wraps up the album on a softer, sweeter note.

Michael Stipe and R.E.M. remain Grutka’s most obvious influences – especially on the opening, shimmering swirl of “Circle” – but he doesn’t wear them on his sleeve as much as he did with “Ria.”

The bouncy “La La Song” melds power pop with a ’70s country-rock feel. “She Said” is a nostalgic but optimistic ballad about loss, fueled by a gentle hip-hop shuffle beat. Chugging rhythms, close vocal harmonies and some deep twang guitar riffs keep “This Is” rolling down the track.

Not as polished as “Ria,” “February Sessions” is looser. It has a much stronger live vibe, which of course is difficult to grab onto when you’re working in a studio all by yourself. But Grutka nails it nicely here.

Mike Grutka celebrates the release of “February Sessions” with a full band performance – featuring Brian Kaplan, Brad Clossen and Mike O’Donnell – at Putnam Den in Saratoga Springs at 9pm on Friday. Admission is $10 ($2 off with a valid college ID), which includes a copy of the new disc.

John Scofield, What Was the First Album You Ever Bought?