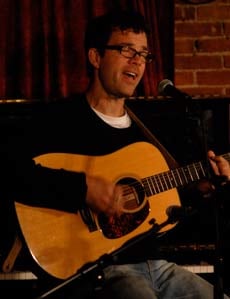 1. THE FIRST ALBUM I EVER BOUGHT WAS … “Fables of the Reconstruction” by REM. I got hooked and now own everything they’ve ever done. I still have it on vinyl.

2. THE FIRST CONCERT THAT I EVER SAW WAS … Ray Charles at the New York State Fair. It was at the free concert stage, and we were wanting to sit for a while as we’d been at the fair for a long time. I don’t think we knew he was performing. We’d go to the fair about 4-5 times a year when I was growing up and walk around to all the exhibit buildings. So every once in awhile we all needed to sit down and rest. I didn’t really know who he was at the time, but I remember being just floored by the band and his voice.

3. THE FIRST MUSICAL INSTRUMENT I EVER OWNED OR PLAYED WAS … Well, I grew up playing the violin, which I started when I was 8. The first instrument I ever owned (the violins were always rentals) was when I went to college when my parents got me a ‘real’ violin for Christmas. I received my first guitar that year, too. My grandfather gave it to me with a Mel Bay chord book. It was a real cheap Silvertone acoustic guitar. The neck was coming off the body and by the time I played a note on the fourth or fifth fret, it was already about a half step out of tune. It was real hard to play because I had to press down so hard. My hands would always cramp. But after playing on that thing for over a year and getting a better guitar, it seemed easy.

4. THE FIRST SONG THAT I EVER PERFORMED IN PUBLIC WAS … I didn’t start playing guitar until I was a freshman in college. I’d practice in my room all the time and try to figure out songs from my music collection. My RA thought I was much better than I was and booked me a gig in the campus pub without asking me about it. I freaked out. I learned a whole bunch of songs in about four weeks. I think the first song I played was either “Good Day Sunshine” or “Hide Your Love Away” by the Beatles. It was pretty terrible. All I remember was how shaky my voice was, and sweating. A lot. Anyway, I guess I should thank him because that started my ‘music career.’ So, thanks!!

5. THE FIRST BAND I WAS EVER IN WAS … When I first moved to Saratoga I had an acoustic trio with two buddies of mine. One sang and played guitar with me and the other played percussion. We called ourselves Fretless, after an REM song. We mainly did a boatload of DMB covers but threw in a few originals that Jim and I had written separately.

Mike Grutka celebrates the release of his new CD, “February Sessions,” with a party and performance with his full band at 9pm on Friday the Putnam Den in Saratoga Springs. Admission is $10 ($8 for students with college ID) and includes a copy of the CD.