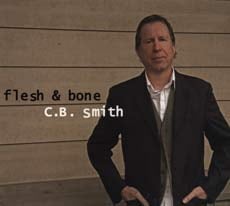 Recorded at NRS Studio in Catskill, Smith’s debut album, “Flesh & Bone” might seem unassuming at first listen, but the songs borrow into your ears and your heart. Smith is first and foremost a songwriter, and the dozen original tunes that he serves up here make for a sparkling introduction to his considerable talents.

Ably abetted by his band – mandolinist Matt Bowe, dobroist Andy Bing and bassist Chuck Jacob – guitarist-vocalist Smith sings in a feathery voice that often underplays the lyrics with an intense whisper, drawing the listener in with an uncommon intimacy.

The ominous, minor-key title track is one of the album’s highlights, with special guest cellist Jane Scarpantoni adding an additional sonic layer of dark atmospherics.

The influence of Lyle Lovett is most evident on the Texas bounce of “Limelight (Three Kings),” a spirited cautionary tale of stardom, that chronicles the tragic endings of Hank Williams, Elvis Presley and Michael Jackson.

Smith and his band nail the songs, and they brought in several guests to spice up the proceedings. In addition to Scarpantoni, banjo pioneer Bill Keith drops by to spike “Who I Am” with some fiery five-string picking. And Leslie Ritter steps up to the microphone for a duet with Smith on the wistful, tragic tale of lost love “Blue Sky Girl,” making it another of the album’s highlights. Fiddler Fooch Fischetti and bassist Scott Petito also make invaluable musical contributions.

If you’re a fan of Nippertown favorites such as Michael Jerling or Jim Gaudet, C.B. Smith’s debut should find its way onto your iPod or CD shelf.

The C.B. Smith Band celebrates the release of “Flesh & Bone” with a performance at the High Falls Cafe in High Falls at 8pm on Saturday. Admission is free.

America vs. England – No, It’s Not the World Cup…