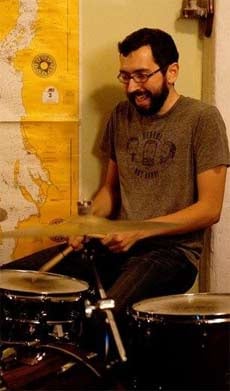 1. THE FIRST ALBUM I EVER BOUGHT WAS … the “Stand By Me” soundtrack. In fifth grade.

2. THE FIRST CONCERT THAT I EVER SAW WAS … Pinkpop Music Festival in the Netherlands, where I grew up. I was 14 years old and got crushed in the mosh pit to a Belgian band called Deus.

3. THE FIRST MUSICAL INSTRUMENT I EVER OWNED OR PLAYED WAS … Played: The snare drum in my 7th grade school band. Owned: Pearl Export five-piece drum set. What a day that was.

4. THE FIRST SONG THAT I EVER PERFORMED IN PUBLIC WAS … “Rhinoceros” by the Smashing Pumpkins

5. THE FIRST BAND I WAS EVER IN WAS … The Cleaning Ladies. In high school. Played only one show at my birthday party in my basement.

Drummer Jon Alveras and his bandmates in the Brooklyn-based chamber-folk ensemble The Loom make their Nippertown debut at Valentine’s Music Hall in Albany on Saturday night. They’ll be showcasing material from their upcoming album, “Teeth,” and sharing the bill with the primo line-up of Eureka Birds, Mia Riddle and hometown heroes Sgt. Dunbar & the Hobo Banned. Showtime is 8pm on Saturday, and admission is $7.