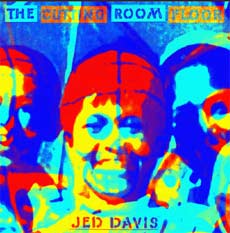 Whoa, Jed Davis is back in Nippertown, and he’s taking no prisoners. Damn, this is twisted pop genius stuff.

After a stint in the oh-so-cool bohemian borough of Brooklyn, he’s back in the Capital Region once again, and whether you know it or not, that’s cause for a serious celebration.

Maybe you remember him from Hanslick Rebellion. Or Jeebus. Or Collider, Skyscape or whatever…

Or maybe you don’t remember him at all. I’m guessing that wouldn’t matter to Mr. Davis, who would probably just as soon have you approach his new, years-in-the-making solo album on its own terms without plugging up your ears with the baggage of the past.

The album slips into your ears with the gothic, “Phantom-of-the-Opera”-like organ intro of the title track, which then settles into a dramatic, accordion ballad. But the album also embraces prog rock (listen to the guitar solo on “Denny’s 3 A.M.”). And chugging power pop of “Before I Was Born”. The hoping-against-hope, baroque-gone-broke “I Have a Rose.” The electro-pop hip-hop of “Blood.” The bitter, bilous, Billy Joel-gone-wrong solo piano ballad, “Native Son.” And there’s jazz, too (check out the film noir-ish, walking-bass sashay of “Interesting Times”).

But Davis is certainly no musical dilettante. He’s fully invested in each and every one of these songs, no matter the musical style or subject matter. He’s a passionate vocalist, a smart songwriter and a delightfully dark lyricist. And it comes through loud and clear on this oft-delayed, nearly terminally troubled gem of an album.

And that’s even including the “Brady Bunch-meets-Three’s Company” reprise of “Denny’s 3 A.M.” that serves as the mystery bonus track. Oh, maybe I shouldn’t have mentioned that. Never mind…

Jed Davis’ “The Cutting Room Floor” has its official release on Tuesday. He’ll be celebrating with an hour-long free performance at the UAlbany Campus Center Wendy’s at 4pm. He’s describing it as “just a solo piano songwritery thing.” And, yes, not only is admission free, but they’re dishing out free coffee to the first 50 folks who show up.

Bret Michaels, What Was the First Album You Ever Bought?