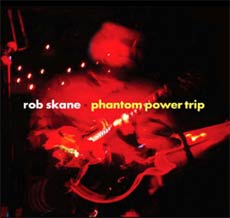 I remember the first time I heard Rob Skane. Back when I was writing for Metroland (about 100 years ago), he was a young whippersnapper who sent me a cassette-only release by his Utica-based band – which shall remain nameless to protect the guilty.

It wasn’t very good. And in my review, I said so rather forthrightly, as I recall, although I also tried to point out the bright and promising elements – few though they might have been.

Since those long-ago days, Skane has become a longtime Capital Region music scene mainstay, doing his thing with such now-defunct, endearingly lo-fi bands as the Dugans (with Howe Glassman) and the Lawn Sausages (with Jim Barrett and Artie Fredette), which, in fact, was actually more of Troy street gang than a band.

Then he went solo, sometimes booking himself as Rob Skane & His Guitar. He practiced. He woodshedded. He played lots and lots of gigs. And over the course of a string of ever-improving, self-released, home-brewed solo albums like “Nowheresville,” “SelfNoise,” “SoloFi” and “The Mouse Mixes,” he found himself.

All of which is the preamble to “Phantom Power Trip,” a genuine gem of an album. It’s more low-key than lo-fi, and it’s got a tantalizing kick, somewhat akin to Nick Lowe’s work – obviously one of Skane’s primal influences – especially on the chugging “You Preach Peace.”

And like Lowe’s stellar oeuvre, Skane delivers profound insights in a casual, matter-of-fact fashion. His vocals are relaxed and resonant. There’s a crackling, deep-twang to his guitar playing that’s part surf-rock, part Richard Thompson without swinging for the fences.

He’s bolstered his sound on this album with a rhythm section that features drummer Peter Maine (of Psychoneedles) and bassist Todd Haviland (of Shu), as well as some exquisitely placed backing vocals by Dale Haskell (of Street Corner Holler).

Recorded at Skane’s basement lair, Los Noise Floor, as well as Edie Road Studios in Argyle, the album isn’t sonically perfect. I wish the drums had more pop and snap to them, for example.

But the songs… There’s a deceptively simple sound to the yearning but wary, hook-filled “Untouchable.” A new wave churn to the frustrated “I Waited.” A vintage ’60s garage rock reverb provides the shimmering backing for “Would You Be There,” which comes complete with a psychedelicized backwards guitar solo. “It’s a Great Day” takes spooky chordal turn as Skane intones such lyrics as “Feeling sharp/Looking razor-thin/The pills I’m taking/Are finally kickin’ in.”

No question, this is Skane’s best work to date. It’s full of confidence, burn-into-your-brain hooks and grown-up insights.

Rob Skane celebrates the release of “Phantom Power Trip” with a party and the performance debut of the Rob Skane 4 at The Ale House in Troy at 9pm on Saturday. Admission is $5.

Congratulations to Scott C. and Mykel!