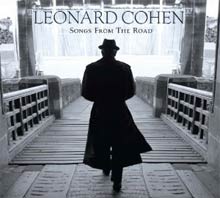 His newest album – a DVD/CD package – was released last week, and its a sheer delight, featuring a dozen live performances from his 2008-2009 world tour.

There are songs both old and new – including such classics as “Suzanne,” “Bird on the Wire” and a rendition of “Hallelujah” filmed at the Coachella Music Festival that manages to reclaim the overdone gem from the hands of desperate “American Idol” contestants.

Best of all, however, are “Famous Blue Raincoat” (from London’s O2 Arena) and “Chelsea Hotel” (from Royal Albert Hall) that cut deep into Cohen’s poetry and understated performance.

There’s an innate intimacy to Leonard Cohen’s music. These are not just songs; they’re more like prayers, hymns or whispered confessions. And Cohen delivers them with a master’s touch that puts him in league with such great songmen as Charles Aznavour and Jacques Brel.

The performances clock in at about 70 minutes, and the DVD features a 20-minute bonus, “Backstage Sketch,” behind-the-scenes chats with Cohen’s bandmembers and crew, filmed by Leonard’s daughter, Lorca Cohen.

This set – with the same songs on both the DVD and CD – makes a perfect then-and-now companion piece to the DVD/CD set “Leonard Cohen: Live at the Isle of Wight 1970,” which Columbia/Legacy released last year.