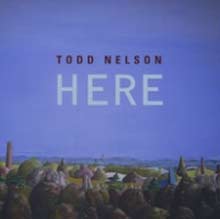 Guitarslinger Todd Nelson has been a mainstay on the Nippertown music scene for more years than he probably wants to count – from the crackling country-rock of Silver Chicken to the bristling new wave of the Units (later renamed Fear of Strangers) to the more recent groove-gurgling swamp-rock of Rumdummies, to name just a few of the stops that he’s made along the way.

None of which exactly prepares you for his just-released album, “Here,” recorded at Cotton Hill Studios in Albany. The first surprise is that it’s an all-instrumental album. Secondly, it’s a solo album only in that it’s Nelson’s name above the title; it’s actually a trio that also features the sublimely slippery fretless bass of Kyle Esposito and the percolating drumming of Manuel Quintana, who both happen to be Nelson’s bandmates when they back up singer-songwriter Anna Cheeks.

Thirdly – and most importantly – the music leans toward the jazz end of the spectrum, especially on the two traditional tunes: the eight-minute, gospel-informed “Into the House” and the seductive, snaking treatment of “The Blacksmith.” I wouldn’t necessarily classify this as a jazz album – or anything else, for that matter – but the influence is certainly there.

Elsewhere on the album, Nelson re-configures nuggets from his days with the Units, including the bubbling, boogie-blues bump of “Volts” and the angular sophistication of “Dinosaurs,” both of which Nelson co-authored with Units bassist Steve Cohen back in the day.

There’s also the smooth-but-funky lead-off track, “Lois Is Out,” fueled by Quintana’s backbeat and syncopated cowbell. If I’m not mistaken, the song is actually another vintage Units nugget, “I Need to Be Told,” which for some reason has been re-titled.

Rounding out the album are the litling ballad “Crestfallen” and the moody, but gently chugging “Wheels Across Sonora,” a pair of tunes Nelson co-penned with his Rumdummies bandmate, harmonicat Pat Conover.

Nelson’s guitar sound is clean and crisp, but always warm, bringing to mind Bill Frisell, not just in sound, but also in the genre-smashing eclectism of his repertoire.

Despite his lengthy musical career, Nelson’s recorded output has been all too sparse. This album goes a long, long way in remedying that situation. A stellar break-out recording that is worth the wait.