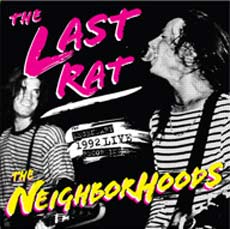 The Holy Grail has landed.

Anybody who is a Neighborhoods fan will tell you they have been waiting 18 years through all the rumors, promises and false starts impatiently for the genuine article to appear. “The Last Rat” is a live recording made on October 24, 1992, at the venerable and gone Boston rock dive the Rat. It was the last wave goodbye from a band that spanned 17 years, put out 5 albums, logged thousand of miles and at every show left it all out on the stage.

From the opening salvo of “The Last Rat,” it all comes flooding back -vividly! I’m in love with the Hoods all over again! The two-CD set documents a well-oiled fighting machine that was the ’92 Hoods. That line-up was Dave Minehan on guitar, Lee Harrington on bass and Carl Coletti on drums for 21 of the whopping 29 tracks on this double live CD package. The recording – blemishes and all – reveals the Hoods as a highly evolved hard-rocking-outfit with nods to Alice Cooper, Aerosmith and Cheap Trick.

And you can hear it all in Dave’s serpentine and sharp guitar playing, passionate vocals. Lee’s sinister songwriting contributions on tracks like “Diane,” “King of Rats” and “Crown Victoria.” The technical precision and flawless clock-like time-keeping of Carl’s drumming that perfectly punctuates the latter period Hoods sound.

The Hoods formed in the late ’70s with punk and power pop underpinnings. The last six-track mini-set on disc 1, reunites Dave with the original, Rumble-winning line up of bassist John Hartcorn and drummer Mike Quaglia, who reflect the Jam-influenced early Hoods in all their intense attitude and glory. Playing the songs they recorded for their highly sought after “Prettiest Girl” b/w “No Place Like Home” 45, along with the Gen-X cover “Ready Steady Go.”

Disc 2 opens with the Hoods illustrating what Dave said during the Hoods’ Boston Music Hall of Fame induction speech: “The Neighborhoods are a band not without short-comings, but with a desire and unique ability to ‘burn white hot’ in performance!” They are joined onstage by Aerosmith guitarist Brad Whitford (who produced their self-titled Atlantic Records release) for a killer, bang-on telling of the original “Roxxanne” that segues into the Rufus Thomas gem “Walkin’ the Dog.” Drummer Mike Quaglia rejoins Lee and Dave for “Tommy” and “Think It Over.” It was this line up that defined the Hoods for much of the ’80s. Mike’s loose, hooky drumming and terrific backing vocals were a trademark of that era.

Throughout it all, Minehan comes through loud and clear as a natural-born frontman and gifted song-writer who makes the Hoods what they are in all of their various incarnations. And the witty and talented Lee Harrington raises the band to a new level, the irreplaceable bandmate.

The Hoods never shied away a good cover, and the lesser known of the five included here close out disc 2. “Spy Master,” “Hot Steel and Acid” and “That’s How I Escaped my Certain Fate” serve to pay tribute to the Hoods’ love of the Boston rock scene. In the end, as Harrington says, “It was not chasing the record deal and achieving recognition. It was the people who came and became our friends along the way that truly mattered.” And that’s how they go out – thanking us, the audience.

The album was mixed by David Minehan at his studio, Woolly Mammoth Sound, and is available online.