Johnny Mathis, What Was the First Album You Ever Bought? 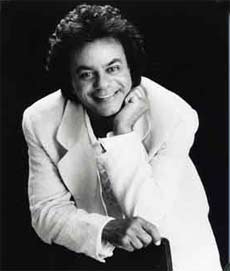 “You know, we weren’t poor, but we didn’t have a lot of money because I come from a large family. So I don’t remember ever buying a record. What I did was I listened to music on the radio and went to friends’ houses who had recordings.

But the way I heard most of my first music was it was played for me by my dad, who was a good singer and piano player.

He taught me the first two albums’ worth of songs that I recorded. After I had a hit record or so, I was left on my own really to find songs that I wanted to sing, so I reverted to the ones that my dad sang. Those are the ones that I put on the first couple of albums, like ‘Heavenly’ and ‘Warm.’

And he would also bring home records of what he called ‘sweet music’ – records by singers like Nat King Cole, Billy Eckstine and Peggy Lee. He liked music with a jazz influence.”

Veteran vocalist and hitmaker Johnny Mathis has been recording for more than a half century. His latest album, “Let It Be Me: Mathis in Nashville,” was released just last week. And he’ll be stepping into the spotlight at Proctors in Schenectady at 8pm on Saturday. Tix are $20, $40, $60, $75 and $100.