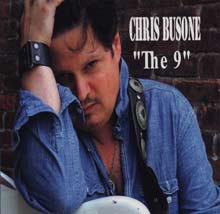 Chris Busone has been a longtime player on the Nippertown music scene – remember the Chaser Band? – but he hasn’t captured much of his music in the studio.

Listening to this album, you’ve got to wonder why? Busone has definitely got the songs, and he showcases seven strong original tunes here. He’s got a soulful rock voice that’s supple enough to slide off in a number of different stylistic directions. And he’s a fine guitarist as well.

Busone is no one-man band, however, and he got some able help on the recording from the veteran Tony Perrino (on drums), Bob Laube (bass) and co-producer Mark Larose, who pitched in on bass, drums and a bit of guitar.

Showing off a bit of his range, Busone filled out the album with an intriguing pair of odd-couple covers. He takes the Bob Dylan evergreen “Don’t Think Twice, It’s All Right” and slows it down to ballad tempo. He hits the mark with the album closer – a twinkling, solo voice ‘n’ guitar rendition of Gino Vannelli’s “I Just Wanna Stop.”

Busone’s originals hit the mark, too, especially his opening volley of “I Mean Love,” a funky, soulful stroll that showcases Busone’s vocal passion in a Van Morrison-meets-Willy DeVille setting.

Chris Busone celebrates the release of his new album, “The 9,” with a party and performance at Footsy Magoos in Troy at 9pm tonight (Friday).