Yes, we here at Nippertown.com have unfortunately let several excellent homegrown CDs slip through the cracks. These things sometimes happen when you’re a little Mom & Pop website trying to cover a whole bunch of stuff around a rapidly growing arts scene. But we’re making a renewed effort to play catch up over the next couple of weeks. So some of the upcoming CDs that we’ll be reviewing might not be “new” new, but we didn’t want them to go unnoticed… 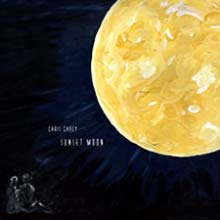 Chris Carey is probably best known around Nippertown as the drummer with Railbird, and let’s face, when a drummer steps out to record a solo album, sometimes, well, eyes tend to roll.

Fortunately, that’s not the case with “Sunset Moon,” an excellent showcase not only for Carey’s considerable talents as a lead vocalist, but also as a songwriter and arranger.

These ten original tunes by Carey sparkle with an easy-going, country-folk feel, eschewing the progressively adventurous, indie-rock path that Railbird has been following.

Carey handles the bulk of the musical duties (guitar, percussion, piano, keyboards and harmonica, in addition to vocals and drums), but he has also assembled an A-list team of local musicians to support him on this debut effort, including guitarist Chris Kyle and vocalist Sarah Pedinotti (of Railbird), bassist Tony Markellis (Trey Anastasio Band), dobro and pedal steel player Kevin Maul (No Outlet) and fiddler Tim Wechgelaer (Jim Gaudet & the Railroad Boys).

The album was recorded at Right Angle Recording in NYC and Edie Road Studio in Argyle, and the production – by Carey and Jonathan Jetter – is crisp, clean and ready for the radio.

The album embraces a ’60s and ’70s sound without wallowing in throwback aesthetics. The disc opens with a loose, funky shuffle through the sunny “Nothin’ On My Mind,” punctuated by some wheezing harmonics riffs. On “Feelin’ Good,” Carey slides effortlessly into a sweet falsetto, while Maul’s pedal steel pushes the song in a country twang direction.

“Freewheelin’,” meanwhile, is a jaunty-but-gentle, swing-infused blues. And the closing “Song for the Sun” resonates with echoes of the Beatles’ “Blackbird” and “Dear Prudence,” but Carey carries it off into slightly jazzier territory on the bridge.

This is damned good stuff, and it’s great that Carey has gotten out from behind the drums to let us hear it.

Rich Robinson, What Was the First Album You Ever Bought?