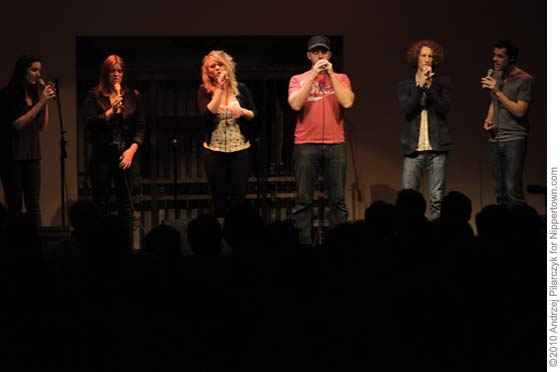 The human voice unadorned is a magical thing.

On Friday night at The Linda in Albany, Los Angeles a cappella group Sonos multiplied that magic by six, applied it to a hipster’s dream repertoire of indie rock odes and layered on just a pinch of electronics.

No question about it, with Sonos the end result is much greater than the sum of its parts.

They opened the evening with Chris Isaak’s “Wicked Game,” and it sounded even spookier and more dream-like than Isaak’s original version. Ben McLain spit out some beat-boxing mouth percussion. In the middle of the tune, they slid into a remix breakdown. And at the end, they nailed a slow, smooth fade-out.

And that was one of the more mainstream selections of their brilliant two-set performance.

Jessica Freedman led her decidedly contemporary arrangement of the traditional gospel classic, “Sometimes I Feel Like a Motherless Child,” making it sound like something from Dido’s songbag. And that’s about the only time that the word “traditional” could be applied to Sonos’ performance.

Chris Harrison handled most of the bass parts, sometimes took over the beatboxing chores and then stepped up to the lead vocal microphone for a lush, moody rendering of Depeche Mode’s “Enjoy the Silence.”

Rachel Bearer took Bjork’s “Joga” into dimensions that even Bjork hasn’t explored. Paul Peglar made Rufus Wainwright’s “Oh What a World” his own (no easy task) and wove Ravel’s “Bolero” into the mix as well. He even got the surprisingly large crowd to clap along – on the off-beat, no less.

When the instrumentless sextet wanted to really cut loose, however, they called on Katherine Hoye, whose soul-shouting voice rattled the rafters during during Lewis Taylor’s neo-soul “Bittersweet.”

In truth, though, the individual voices were just the icing on the cake. What makes Sonos stand out from the rest of the we-still-ain’t-got-no-band crowd is their glorious ensemble work. Their voices blend perfectly, and yet, their arrangements are full of glorious surprises. 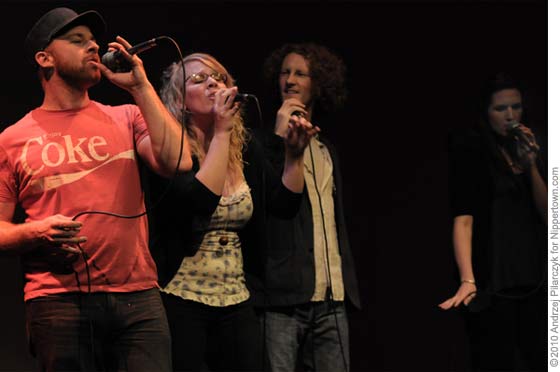