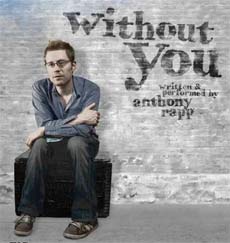 You may recall earlier this month when we told you about Woodstock guitarslinger David Malachowski playing in Broadway star Anthony Rapp’s new one-man musical theater performance, “Without You.”

Well, the show just completed its NYC premiere with a run of 11 sold-out shows as part of the annual New York Musical Theater Festival. And it had reviewers raving.

Rooney also wrote, “Memorable musical theater is about those transporting moments when a song reaches out and communicates that ineffable something to the audience, connecting with our feelings and deepening our insights in ways that dialogue-based scenes rarely can.

“I had my first such moment a few days into my festival rounds, when melody, meaning and a surge of genuine emotion made me sit up and pay attention.”

The song? R.E.M.’s hit “Losing My Religion,” which is included in the show because that’s the song that Rapp sang when he auditioned for the part in “Rent.” Yeah, the role that made him a star.

Up next, Rapp, Malachowski and the rest of the crew take “Without You” to Japan for a two-week stand in December.