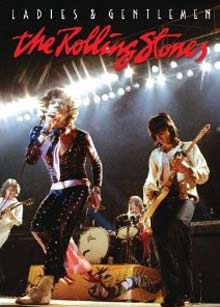 Filmed over the course of four shows in Texas on their ’72 “Exile on Main Street” tour amd originally released theatrically in ’74, “Ladies and Gentlemen, the Rolling Stones” offers solid proof that at one time the Stones were the “World’s Greatest Rock and Roll Band”.

Spliced together to represent one show (obvious by the constant sudden costume changes), this concert flick finds the boys in top form right from the start blasting a tight, gritty, rough ‘n’ tumble set of material mostly drawn from what’s arguably their most prolific period (“Let it Bleed”, “Sticky Fingers” and “Exile…”), and they look, sound and feel like a band determined to stake their claim.

Every bit the swaggering, pirate-cool personified, Keith Richards is totally into the music, locking in with Charlie Watts, sharing the mic and spotlight with Mick Jagger on “Dead Flowers” and “Happy” and generally anchoring the whole thang with his trademark chops.

Mick is decked out in period glam and on the move, spitting out his snotty, white-boy R&B vocals. The band is set up tight-knit onstage, and that gives it the exciting feel of a rock band working as a unit, before they became caricatures of themselves with the over-blown stage sets and over-exaggerated arena moves.

Workmen-like Bill Wyman and Mick Taylor flank the energy and excitement of the Glimmer Twins like two statues, motionless. Taylor in particular looks a bit pedestrian onstage in his extremely dated ’70s clothes, but all that is forgotten once he unleashes devastating lead after devastating lead – witness “Love in Vain,” etc., etc…

Texan Bobby Keys proves himself every bit a “key” member of the group spotlighting rock’s forgotten secret-weapon, the saxophone, on songs like the acoustic-based “Sweet Virginia” and the flat-out rocking “Rip This Joint.”

And Charlie Watts… well, what can you say? He rocks, he swings and drives it all home. Check out the hypnotic groove he lays down on “Midnight Rambler”, the song that Mick launches with a slug of Jack Daniels and a shot of harp.

Mick’s vamp in the pre-female-background-vocal version of “Tumbling Dice” shows how soulful the Stones could be and speaks to the lessons they learned from their heroes, such as Solomon Burke.

The set is played at an amphetamine pace giving the whole vibe a vital, desperate boost. “Street Fighting Man,” “Bitch,” “Bye Bye Johnny,” “All Down The Line” and “Rip This Joint” are attacked with punk-like urgency. Which shouldn’t be surprising, as this is after all the long-haired rock and roll band that inspired hundreds of garage-punks in the ’60s to grow their hair, pick up guitars and rebel.

Oh yeah, there was that other group of mop-tops too, which brings up the age-old, tiresome debate of who was better: the Beatles or the Stones? A matter of taste I suppose, but a far as who was the better live band… No argument, as evidenced here. Is there? Anyone? Anyone?

The “World’s Greatest Rock and Roll Band”? Well, with glam clearing the way and punk hot-on-their-heels, the Stones’ reign would soon end, but at that moment in time, circa 1972, at their peak, YES!

Rating: 10 for performance, 7 for the audio/visual technical aspect. Listening to it on the Dolby Stereo setting, I found the sound to be good, if not outstanding and the video transfer decent considering the original was shot only using shadowy stage lighting. The two bonus feature interviews with Mick, past and present, yield no major revelations, but only underscore how better he looked and cooler he was back then. However, the three rehearsal takes also included – especially Slim Harpo’s “Shake Your Hips” – show Keith once again lost in the music. They are fun to watch to see the band just playing without the trappings of a “show.”

Warning to completists: an expanded version of this DVD is due out with added material, but for the current online cost of $7.99, this is well worth the price for this seventh row seat in rock ‘n’ roll history.

DVD Bonus Material:
Tour rehearsal footage from Montreux (“Shake Your Hips” “Tumbling Dice” and “Bluesberry Jam”), plus two interviews with Mick Jagger (one from a 1972 Old Grey Whistle Test show and one filmed in 2010).

Another One Bites the Dust…