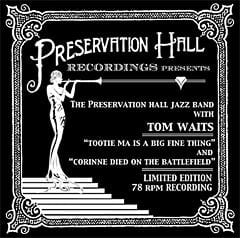 All proceeds from the sale of this very special project will benefit the Preservation Hall Junior Jazz & Heritage Brass Band.

“Tootie Ma Was A Big Fine Thing” and “Corrine Died On The Battlefield”
were recorded by Waits and New Orleans’ Preservation Hall Jazz Band last year and were originally featured on the critically acclaimed all-star compilation album “Preservation: An album to benefit Preservation Hall and the Preservation Hall Music Outreach Program,” which also featured Ani DiFranco, Pete Seeger, Merle Haggard, Andrew Bird, Del McCoury and many other singers – each back by the traditional New Orleans jazz ensemble.

Now the two tracks are being re-packaged in a special limited edition 78 RPM format record, each signed and numbered by Preservation Hall’s creative director (and tuba player) Ben Jaffe. The first 100 records will be accompanied by a custom-made Preservation Hall 78 RPM record player as part of a deluxe donation package ($200). The remaining four hundred and four will be available as a stand-alone record for the basic donation package ($50).

The Preservation Hall Jazz Band will be making a tour stop at the College of Saint Rose’s Massry Center in Albany at 7:30pm on Tuesday, October 26. Tix are $25.