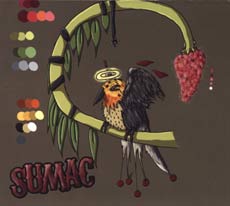 Led by former Jackinany frontman Jeff Burger, the Troy-based Sumac comes out of the gate with a rough and tumble, self-titled, five-song EP that walks the tightrope between rootsy Americana and rollicking garage rock.

The disc starts off with a folksy, acoustic guitar-strumming intro augmented by some weird wind sound effects, but then “Long Winter” kicks in with distortion-driven electric guitars and a rumbling rhythm section that sometimes sounds like a cross between the Velvet Underground and Neil Young’s Crazy Horse.

The best of the mini-album’s songs – the hook-filled garage romp of “West Coast Blues” and the Farfisa-fueled chug of “Mexican Tradition” – lean more toward the back-to-basics, ’60s-rock end of spectrum, leaving the roots-centric American behind.

The band recorded at Collar City Sound in Troy with Seamus McNulty engineering, although the disc is self-produced. The production values don’t have much radio-ready polish, but I’m guessing that’s the way the loose, lo-fi band wanted it.

Whatever kind of raw sound that Sumac was aiming for, however, the band might want to invest in a spell-checker or at least a semi-pro proofreader. The CD packaging doesn’t need to be as loose and casual as the disc. Any number of words are misspelled. Names are incorrect -including the name of the studio where the disc was recorded. (It’s Collar City Sound, not Collar Sound). Song titles are wrong (?!?). And if you’re going to thank someone on your CD, the least you can do is spell their name right. (Poor Jimmy Barrett at River Street Beat Shop gets hit with a double whammy in the thank-yous – as “Jim Barret” and “River City Beat Shop”).

Sumac celebrates the release of their new CD with a party and performance at the Ale House in Troy at 9pm on Saturday. Grainbelt opens the show. Admission is $8, which includes a copy of the CD.