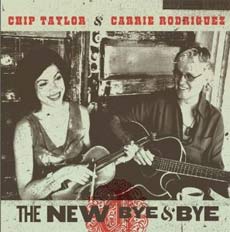 Carrie Rodriguez released her third solo album, “Love and Circumstances,” earlier this year. It’s a delicious all-covers album which finds her delving into the songbags of Richard Thompson, Merle Haggard, John Hiatt and others. (Read our review here)

But Rodriguez first came to national attention with a string of albums that featured her as the fiddling ‘n’ singing musical partner of Chip Taylor, the author of such gems as “Wild Thing” and “Angel of the Morning.”

It was an odd-couple pairing, but it worked marvelously. And this best-of compilation collects a bakers dozen of the best tracks from the four discs that they recorded between 2002-2007.

If you’re not already familiar with those albums, this is an excellent introduction to their Johnny/June-meets-Gram/Emmylou-meets-Buddy/Julie duet approach.

But even if you’ve already got all of those CDs, you might want to add this one to your collection, anyway, because this compilation kicks off with four brand new duets. Accompanied by such ace players as John Platania and Greg Leisz, Rodriguez wraps her twangy voice around Taylor’s craggy, talk-singing on the hushed ballads as “Your Name Is On My Lips,” “On an Island” and “Play It Again Sam,” as well as the down-on-our-luck, drinking-again title-track waltz.

Carrie Rodriguez co-headlines a dynamite double bill with Jim Lauderdale at 9pm on Saturday at Club Helsinki Hudson in Hudson.

Song of the Week: Lunic’s “Him”