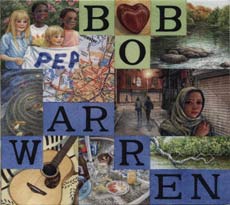 North country singer-songwriter Bob Warren has been mighty busy during the past several years.

In fact, he’s been so busy that he didn’t seem to have time to record an album of his own since 2002’s “Clear Connection.”

Fortunately, “Bob Warren” corrects that oversight. As he explains in the liner notes, “Along the way, a bunch of other songs got written, my authorship being the only common denominator, and so, well… here I go again! Here is a collection of songs that a sensible person would not put in the basket.”

And while it is a mighty diverse batch of songs, the variety only enhances Warren’s stature as one of Nippertown’s most astute and versatile songwriters.

Co-produced by Warren and bassist Tony Markellis, the 11 songs were recorded at Edie Road Recording Studios and Hilltop Recording Studios in Greenwich with an array of musicians including Danny Whelchel, Don Warren, Paul Asbell, the late Richard Bell, Peg Delaney, Monica Wilson-Roach and others.

Overall, the album’s songs probably fit best in the folk-rock category, but Warren seems to draw inspiration from some of the best. “Better Than to Pray Like That” is a wry, gospel-influenced ditty that drips with Randy Newman-like insight. Warren Zevon’s influence seeps into the harmonica-wheezing stomp of “Pitiful Man.” And Lyle Lovett should consider covering the kiss-off, “He Don’t Live Here Anymore.”

There’s the bent-but-not-broken folk ballad, “Prove Me Wrong,” looking back at the we-can-change-the-world idealism of the ’60s. There are a couple of fine songs that pay homage to the joys of North Country living (“The Battenkill” and the jaunty, jazzy, Harry Nilsson-like “And to Live Right Here”). And then there’s the horn-fueled jazz-blues of the album’s closer, “Life, Love & the Pursuit of Happiness,” that simply celebrates life.

And Warren takes a wholly expected turn with “Patio Set,” transforming a mundane suburban noise complaint into a raging, arena-rock anthem. Too funny…

Bob Warren celebrates the release of his new album at Caffe Lena in Saratoga Springs on Saturday night, performing with many of the musicians on the CD, including bassist Tony Markellis, drummer Danny Welchel and electric guitarist Don Warren. The 7pm show is SOLD OUT, but the Caffe has added a second show at 9:30pm. Tix are $15 in advance; $17 at the door.