CD: The Spampinato Brothers’ “Pie in the Sky” 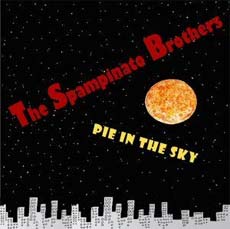 Joey and Johnny Spampinato are, of course, half of the illustrious, omni-pop superstars NRBQ, or at least the last known incarnation thereof.

So it’s no surprise where these guys are coming from – rollicking pop-rock with loosey-goosey rhythms nestled alongside sweet ballads.

For their debut as the Spampinato Brothers, Joey (bass) and Johnny (guitar) have teamed up with guitarist Aaron Spade (Johnny’s bandmate in the Incredible Casuals) and drummer J. Cournoyer.

The album opens up with the rollicking “Let Him Think on That,” which is pretty much a cousin of the Beatles’ “You Can’t Do That.” They shift gears for the jazz-flecked “Baby Oh Baby,” rev it back up for “Refined Man,” and then take a decidedly left-hand, but still shimmering pop turn with “My Mother’s Mother’s Day Card.”

The gentle bossa nova of “Girl in My Dream” leads into the quirky but quick (clocking in at just a minute and a half) “I Say Good Day Goodnight” penned by NRBQ co-founder Steve Ferguson and originally recorded by the ‘Q back in ’68. Well off the beaten track is the goofy “A Bear Is a Bear Is a Bear,” which is, well, goofy, to say the least.

My current fave on the disc, however, is a chugging cover of Bill Doggett’s instrumental “Boo-Da-Ba,” which features a stellar guest appearance by the Lustre Kings’ Jeff Potter on organ and harmonica. It’s some righteous romp ‘n’ roll…

The Spampinato Brothers will make their Nippertown debut at 8pm on Sunday, playing a CD release party at the Ale House in Troy. Tix are $20.