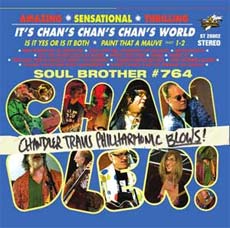 Those are the bold-faced adjectives that are splayed across the inside cover of the latest digital-friendly disc that’s dropped from the slightly surreal mind of Chandler Travis and his equally off-center band. And the only one of those descriptors that I’d argue with is “startling” because, well, after all of these years, we’ve come to expect the unexpected from Mr. Travis, which, of course, diminishes his power of startlement.

A veteran of such fun-loving combos as Travis Shook & the Club Wow and the Incredible Casuals, Travis hasn’t changed his stripes (or his pajamas) this time around. Although rooted more deeply in jazz than his previous outfits might indicate, these dozen tunes make for a rompin’ good time.

The premise of ‘Chandler Travis Philharmonic Blows!’ is that combining jazz and rock doesn’t need to be earnest and pretentious,” explains the singer-guitarist-songwriter. “In fact, there’s a lot of fun that’s gone un-mined there. Jazz, in particular, has gotten so clinical in the last 40 years or so, and ‘Blows!’ is kind of a call to remove heads from asses…

A nod to trumpeter Kenny Ball’s 1962 hit song “Midnight in Moscow,” the album opens up with “Mid-Morning in Moscow,” a slinky but sassy instrumental that gives the bandmembers plenty of room to strut their stuff before erupting into delicious Dixieland cacaphony. “Graciously” – co-authored with Nippertown writer-artist-Duplex Planet founder David Greenberger (as is “You and Me, Pushing Up Daisies”) – is a flat-out party set to an irresistible New Orleans second-line parade beat.

Indeed, it’s the horns – and there are quite a bevy of them on this disc, in addition to Philharmonic regulars Mark Chenevert, Ken Field and Bob Pilkington – that drive these tunes.

And while there are a fair number of instrumentals featured here, Travis’ vocals are just as sharp – especially on the what-else-could-go-wrong travelogue of “The Day the Casuals Went to Sweden,” the dub reggae workout of “Work It” and “Taoist Vacation with Mashenka,” his sashaying, bossa nova duet with Jennifer Kimball.

The Chandler Travis Philharmonic celebrates the release of “Blows!” with a party and performance at The Linda in Albany at 8pm on Saturday. Tix are $17.

Congratulations to Maureen, Paul and Kathleen!