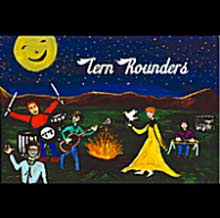 First, the good news… Tern Rounders’ self-titled second album, shows no signs of a sophomore slump whatsoever. In fact, it’s a rather bold step forward from their fine debut album, which found the band in a more acoustic, country-folk mode.

This time around, they’ve added Nippertown music scene vet Rick Morse on pedal steel, which brings out the sweet twang on their more country-oriented songs (the sashaying “Kind Gentleman,” the Burritos-flavored “Everyone’s Got a Dream”), but also pushes them into a more electrified, hellbent direction.

The crux of Tern Rounders’ sound is the pull-and-tug of vocalist-guitarists, Kim Kilby and Marc Clayton. They’re the band’s primary songwriters – although bassist Harry Strole contributes the country-rocker, “Woman in Kentucky” – and their solid vocal harmonies are magical.

On their debut album, Clayton and Kilby were Nippertown’s answer to Gram and Emmylou. This time around when they kick out the jams on rip-snortin’ tunes like “Moment Not Meant to Last” and the scorching, disc-closing “Thank You Sky,” they sound more like John Doe and Exene Cervenka howling at the moon.

Which brings us to the bad news…

Marc Clayton and Tern Rounders have apparently parted company since this album was completed. Kilby and drummer Jim Ketterer – who really percolates on the Latin-spiced “Won’t Be Long” – will carry on with a re-configured line-up, as Stroles moves over to guitar, making way for new recruit Carl Parker on bass.

The departure of Clayton unquestionably leaves a big hole in the Tern Rounders’ sound, especially considering that he wrote or co-wrote eight of the dozen songs on this album. But Kilby seems to have found a new, bigger, tougher, more adventurous voice, indicating that Tern Rounders have a good chance to survive the unfortunate set-back.

The re-vamped line-up of Tern Rounders will make their debut at 8pm on Friday at YOURS Nightclub, 145 Barrett Street, Schenectady. Admission is $5.