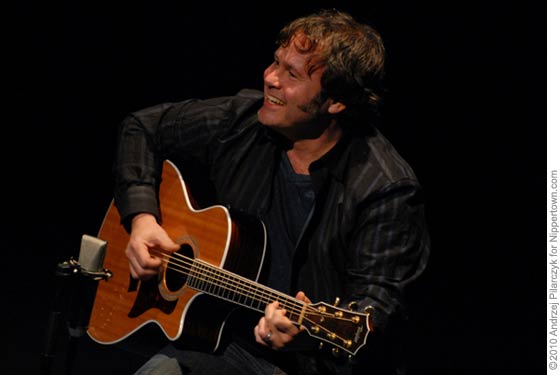 Syracuse singer-songwriter extraordinaire Martin Sexton came to The Egg all by his lonesome – just he, his voice and his guitar.

From his early beginnings busking on the streets in Cambridge to playing sold-out concert halls across the country, Martin Sexton is something of an acoustic-music anomaly. He is not a folkie or a rocker. And he’s not a country singer or bluesman, either. But he does somehow manage to incorporate elements of all of those musical genres into his songs.

So where does he fit in? None of the traditional tags stick because Sexton is a song-writing troubadour with a big, wide-ranging, soulful voice. And he certainly knows how to do more with his guitar than just strum three repetitive chords.

Through perseverance and constant touring, he’s built up a loyal following across the country, and wherever he plays, they come out in mass – just like they did at The Egg’s Swyer Theater last Saturday night.

Sexton’s latest studio release “Sugarcoating” is a magnificent album full of his soulful singing and poetic vision. However with the exception of a handful of songs from that album, Sexton pleased his fans by reaching deep into his songbag and pulling out a terrific batch of tunes going all the way back to “Black Sheep,” “The American” and “On Wonder Bar.”

He honored numerous requests throughout the evening, and as he began nearly each song, Sexton’s music was greeted by applause. Each song seemed to be someone’s favorite.

SECOND OPINIONS:
Excerpt from Brian McElhiney’s review at The Daily Gazette: “Perhaps the evening’s biggest surprise was Sexton’s onstage set-up – eschewing typical instrument and vocal microphones, Sexton sat hunched over one microphone, belting out each song with a gritty fervor that got the crowd going from the moment he took the stage with ‘Freedom of the Road.’ From this song alone it was abundantly clear that Sexton’s massive pipes would be the star of the show. ‘Livin’ the Life,’ a new song, followed with the first of many vocal solos – whistling, this time. The acrobatics continued with ‘Diggin’ Me’s’ rapid-fire chorus hook, and a breezy scat solo highlighting the smooth jazzy undertones of the song.”