Vinnie Amico, What Was the First Album You Ever Bought? 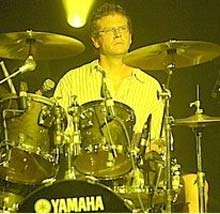 “The first record that I ever bought might be… Well, let me see. Of course, I have an older brother, and he had albums by Yes and Genesis and stuff like that.

I bought a couple of Michael Jackson 45s when I was in the fifth grade or something like that, but the first full-length album that I personally bought was ‘Van Halen I.’ I think that was it.”

Drummer Vinnie Amico and the rest of his bandmates in moe. take the stage at the Washington Avenue Armory in Albany at 8pm on Saturday in support of their new, 20th anniversary compilation disc, “Smash Hits, Vol. I.” Tix are $27.