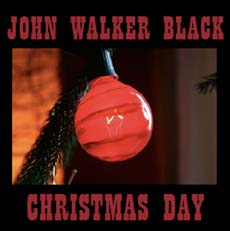 Back in March, John Walker Black charmed us with “Theme to Nippertown,” a somber yet ultimately uplifting paean to the city of Albany.

He followed that a few months later with “Central Avenue,” a mostly spoken-word urban soundscape in three movements that careens from longing to despair to redemption, all in the space of four minutes. It’s a bleak vision of life for those who have all but given up on the American dream.

“The unemployable roam en masse
unable to stop the laws that have been passed
to keep them cold and moving on.”

Now he continues his city-centric series with the newly released “Christmas Day.” From the opening Fennesz-like demented merry-go-round to the last wrenching notes of feedback, this punk ballad is filled with raw, cacophonous guitars and Black’s wailing vocals. As he details life on the street through the eyes of a homeless person, Black doesn’t so much sing the lyrics as inhabit them, with passion dripping from every note.

All three songs were recorded at Axe Iron Sound in Scotia NY by John Walker Black and his producers/band, Luther Hamilton and Elmo Lewis, collectively know as the Unholy Rollers, and Black is promising that more singles will trickle out as they’re finished.

The Theme to Nippertown is available as a free download here. You can watch the accompanying video here.

AAAANNNDD… we’ve got short previews of Central Avenue and Christmas Day. You can buy the full-length songs from iTunes, Amazon or CDBaby for a mere 99 cents each.

All profits from the sale of these singles go to Equinox, to help provide shelter, counseling, advocacy and prevention services for individuals and families with problems of substance abuse, homelessness, domestic violence, and HIV/AIDS.