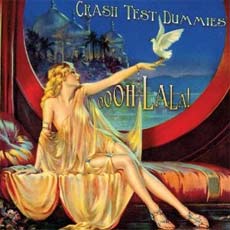 I’ve got to admit that I hadn’t thought about Crash Test Dummies in years, having written them off as ’90s one-hit wonders after their Top 10 hit, “Mmm, Mmm, Mmm, Mmm.”

But then I heard that voice again. Brad Roberts. That sonorous, unmistakable, slightly graveled baritone.

But there’s something different this time around. I remember CTD’s music as smug and irony-laden, but that whole attitude seems to be – gratefully – missing from this new album, the first from the band in six years.

Instead, there’s something more to the music here. It’s not just clever, but honest, too. Maybe it’s the input of producer/co-writer Stewart Lerman, but the songs are refreshingly upbeat – even the woozy, broken-hearted “You Said You’d Meet Me (In California).” The music is also surprisingly varied, musically speaking, from the big band swing of “Now You See Her” to the bluegrassy twang of “What I’m Famous For.”

In fact, this album is intriguing enough that I’m going to have to dig back into the CTDs catalog and find out what I’ve been missing all these years.

In support of “Oooh La La!,” Crash Test Dummies head into The Linda in Albany at 8pm on Saturday, with a stripped down, three-piece acoustic line-up. Opening the show is “Lonesome Val” Haynes of the Units/Fear of Strangers, accompanied by guitarist (and former bandmate) Todd Nelson.