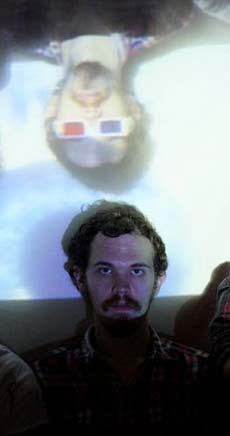 1. THE FIRST ALBUM I EVER BOUGHT WAS … The first record I ever bought was a cassette copy of White Zombie’s “Astro-Creep: 2000 – Songs of Love, Destruction and Other Synthetic Delusions of the Electric Head.” It obviously had a huge influence on completely warping my nine-year-old brain in 1995! Still one of my favorites.

2. THE FIRST CONCERT THAT I EVER SAW WAS … My first concert was Bush and the Jesus Lizard at the Saratoga Performing Arts Center in 1996! As cool as that makes me sound, I was there for Bush and can’t even remember the Jesus Lizard’s performance. Bummer.

3. THE FIRST MUSICAL INSTRUMENT I EVER OWNED OR PLAYED WAS … I played percussion in elementary school, mostly the xylophone. However, I had a few keyboards as a kid that I still use in my recordings to this day. Casio-SK1 Nostalgia!

4. THE FIRST SONG THAT I EVER PERFORMED IN PUBLIC WAS … I actually started out as a hip-hop musician. I was mostly a beat maker, but I did a bit of lyricism as well. I joined my friends in a lot of open mics in high school and mostly performed an old song of mine called “Solace.”

5. THE FIRST BAND I WAS EVER IN WAS … I was in quite a few hip-hop collectives in high school. My first real band was called A Fetish for Ethics. We were a synth punk electro band from Saratoga, and played a lot of shows with the Mathematicians and BEWARE! The Other Head of Science. I provided vocals and synths. Half of that band has since become the righteous Boston-based Birthdays!

Shane Sanchez and Ghoul Poon invade Savannah’s in Albany on Friday night, sharing the stage with BEWARE! The Other Head of Science, Skeletons in the Piano and Severe Severe. Showtime is 8pm, and admission is $7.

Flashback: It Was 30 Years Ago – the Morons