Flashback: It Was 30 Years Ago – the Morons 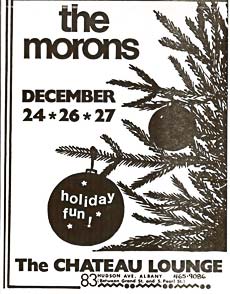 With a series of holiday gigs in December, 1980, looming for the Morons at the legendary Albany new-wave dive-bar, the Chateau Lounge, the band wanted to add a Christmas song to the set list.

Guitarist Billy the M came up with a fast riff combined with a poppy organ part that lead singer TL Stone could shout a punked-out version of “Silent Night” over. They played their irreverent version of the classic carol each night of the three-night stand.

Once the holiday was over, the Morons felt the riff was too good to give-up. Stone had a lyric kicking around, written on a brown paper lunch bag during in-school suspension his senior year of high school, about growing up in the Albany suburb of Schodack.

Soon “Silent Night” became “Suburbanite,” and the following year it would become the band’s first single on Lark Beat Records. Only 500 copies were pressed of the original single (Lark Beat LB001), and it has not been available in any format since then.

As a very special Christmas present to you for a limited time only this holiday season Driving Rain Music offers exclusively through Nippertown.com a free MP3 download of the finished vinyl single “Suburbanite.” This one’s for the kids… Dig it!

Tony Barrand, What Is Your Favorite Holiday Song?