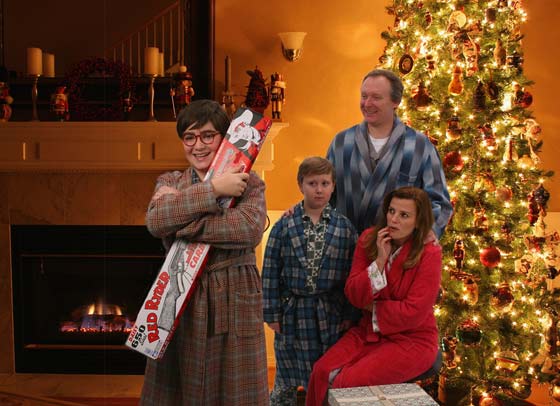 You know exactly what to expect from “A Christmas Story.” And that would seem to be the point.

More than any other time of the year, Christmas is about ritual – the trimming of the tree, “It’s a Wonderful Life,” the baking of the cookies, “A Christmas Carol,” the hanging of the stockings and “The Nutcracker.”

And then there’s “A Christmas Story”…

Jean Shepherd’s tales of a 1940s vintage middle American Christmas didn’t become an official, full-fledged holiday tradition until it was made into the 1983 film starring Peter Billingsley as the young Ralphie Parker who yearns obsessively for the Red Ryder BB rifle for Christmas. The film has, of course, become a holiday television marathon staple.

The arrival of the stage version – adapted by Philip Grecian – at Capital Repertory Theatre is cause for still more holiday celebration. Directed by Maggie Mancinelli-Cahill, it’s a memory play with the narrator (Wilbur Edwin Henry) looking back at a childhood Christmas of his younger self (Aaron Leslie Steck). It’s full of laughs and nostalgia, but underneath it all, there’s a bittersweet lesson about the end of innocence.

The acting is excellent, including the child actors who are at the heart of the production. Henry is delightful as the narrator, full of wistful wit and wisdom, homespun but never sugarcoated. Yvonne Perry and Brent Langdon hit all the right notes as young Ralphie’s parents, bringing out the warmth beneath the laughs. And Brenny Rabine is pitch perfect in the small but broadly comic role as the teacher, Miss Shields.

Mancinelli-Cahill makes the most of the fantasy sequences with help from lighting designer Deborah Constantine. But it’s the versatile work of set designer Steven Capone that really brings the show’s holiday magic to life on stage, as the set opens up like a treasured Christmas gift.

Yes, you already know the plot and the jokes and all about the leg-lamp, but Capital Rep’s production of “A Christmas Story” is a real treat, and it deserves a spot on your Christmas to-do list this holiday season.

“A Christmas Story” continues at Capital Repertory Theatre in Albany through Sunday, January 2.

SECOND OPINIONS:
Michael Eck’s review at The Times Union
Excerpt from Carole King’s review at The Daily Gazette: “Now for the problem: If you have seen the film, you know the jokes. I will not be a Grinch and give too many of them away for those of you unfamiliar with the script, but Philip Grecian, who adapted the film, takes the jokes very seriously. The ‘You’ll shoot your eye out’ line, referring to Ralphie’s dream of owning a Red Rider BB gun, becomes a mantra instead of a mother’s fearful, funny warning. And then there’s the air rifle thing. If the ‘Legendary Official 200 Shot Carbine Action Range Model Air Rifle’ line was said once, it was said 20 times, or so it seemed.”