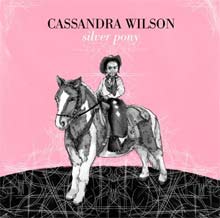 PICK OF THE WEEK

Cassandra Wilson. “Silver Pony” (EMI, 2010): OK, at this point in my life, it has dwindled down to a very precious few handful of artists whose albums I will go out and buy on blind faith. Ms. Wilson is one of them of them. And once again, she hasn’t let me down. In fact, this might well be one of her best – a strange amalgam of live, live-augmented in the studio and more. Blues, jazz, pop, funk – you know the unpredictability of her repertoire. Her interpretation of blues legend Charlie Patton’s “Saddle Up My Pony,” might be one of the most quintessential tracks that she’s ever recorded. She also delves into Paul McCartney (“Blackbird”), Stevie Wonder (“If It’s Magic”) and even Big Star (a de-lish duet with John Legend on “Watch the Sunrise”). And, yes, she manages to re-invent standards, whether it’s the opening volley of Oscar Hammerstein’s “Lover Come Back to Me” or the percolating funeral blues of “St. James Infirmary.”

The Jimmy Giuffre 3. “The Jimmy Giuffre 3” (Atlantic Jazz, 1988) Recorded in 1956 and originally released in 1957, the Giuffre’s original drummer-less trio still sounds fresh and surprisingly contemporary a half century later. With Giuffre leading the way on tenor and baritone saxes, as well as clarinet, guitarist Jim Hall and bassist Ralph Pena display an empathetic feel that never fails to swing – even on the ballads (“My All”). This ’88 re-issue includes a pair of bonus tracks from ’57 with Jim Atlas taking over the bass chair.

The Bird and the Bee. “Interpreting the Masters, Volume 1: A Tribute to Daryl Hall and John Oates” (Blue Note, 2010) The feathery-voiced Inara George and her programmer/producer partner Greg Kurstin slyly update eight of H&O’s ’80s hits while remaining true to the originals. No obscurities. No radical re-inventions. Just a crisp electro-centric spin that reminds you just how good these songs are.

Merle Haggard. “A Tribute to the Best Damn Fiddle Player in the World (or, My Salute to Bob Wills)” (Koch, 1995) Recorded in 1970, this album is in my humble estimation the best tribute album ever recorded. The Hag was at the top of his game – although, he hasn’t slipped much over the years – and, of course, Bob Wills, the King of Western Swing, was a worthy subject. Hag taught himself to play fiddle, and gathered together many of the Texas Playboys’ alum for the recording. I’ve listened to this album more than a 100 times, and it still sounds oh so sweet. Yes, I once had a t-shirt made that said “Merle Haggard Is God.” Wish I still had it…

Clive Palmer. “All Roads Lead to Land” (The Communion Label, 2004) As you might expect from a founding member of the Incredible String Band, Palmer takes the road less traveled through the folk frontier. Eccentric banjo tunes, wordless vocal drones and jug band blues with stops along the way to visit Errol Garner (“Paris”), Ralph Vaughan Williams (“Linden Lea”) and George Gershwin (“Embraceable You”).

Judy Garland. “Judy at Carnegie Hall” (Capitol, 1989) Simply one of the best damn live albums ever recorded. I plucked this one off the shelf because I was prepping for Rufus Wainwright’s concert at the Egg (12/9/10), and it’s still a kicker. There’s honest-to-goodness electricity in the air – and on the disc – even during the overture. Yes, Garland was a true force of nature, and her opening volley of “When You’re Smiling” is better than most A-list performer’s closing numbers.