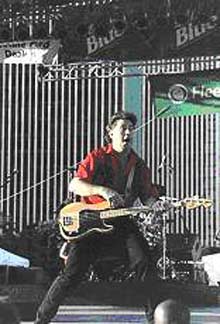 1. THE FIRST ALBUM I EVER BOUGHT WAS … Pink Floyd’s “Dark Side of the Moon.” (I have an older brother who influenced me a lot in my musical tastes early on.)

2. THE FIRST CONCERT THAT I EVER SAW WAS … Blue Oyster Cult at the Poughkeepsie Civic Center (Summer, 1980 or thereabouts)

3. THE FIRST MUSICAL INSTRUMENT I EVER OWNED OR PLAYED WAS … Trumpet. I started off on trumpet because that’s what the school band needed. My parents asked why I wasn’t practicing, and I told ’em I wanted to play bass. Two neighborhood friends wanted to start a band – one played guitar, the other drums. They needed a bass player. And I’ve been playin’ ever since! My parents said that if I was willing to practice, they’d pay for lessons and get me a “real” bass right outta the gate. They hired a kewl bassist from the local “Radar Rangers” band who gave me lessons…and I still have that “first bass” today (an American made Fender precision…still a part of my bass arsenal.)

4. THE FIRST SONG THAT I EVER PERFORMED IN PUBLIC WAS … Link Wray’s “Jack the Ripper” with Andy Follette and the Bluescasters at Marist College (1983).

5. THE FIRST BAND I WAS EVER IN WAS … We called it The Band (not knowing Rick Danko and Levon Helm already claimed that name in nearby Saugerties, NY). The guitarist (Frank Perri) now plays in a Led Zeppelin tribute band, and the drummer (Marco Laboy) now coaches soccer in Dutchess County. What a great band!

Ken Briggs and his bandmates in Nite Train will rumble into the Dinosaur Bar-B-Que in Troy at 10pm on Saturday. Admission is free.

Lionheart Vs. Lionheart on Friday