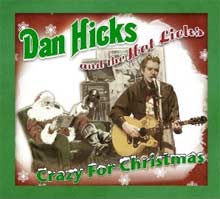 For the first time in many years, I’m not doing a big round-up of all the new holiday music albums. But I am going to pluck three of my favorite discs out of this year’s batch and review ’em.

This is the first one:

And, believe it or not, this is the Hot Licks’ first-ever Christmas album. Fans, however, will remember that Dan Hicks has devoted considerable studio time to the Christmas holiday repertoire with his ad hoc all-star combo, the Christmas Jug Band, who have graced holiday music lovers with such nuggets as “Mistletoe Jam,” “Tree-Side Hoot,” “Rhythm on the Roof” and “Uncorked” over the years. (There’s also a live CJB CD, too, “On the Holiday Highway.”

Hicks & Licks serve up the holidays pretty just exactly as you’d expect – loose as a goose, but solidly swinging. This album definitely ain’t over-rehearsed, which is the real beauty of it. Yes, the players are good enough to keep the music zipping along, and Hicks’ wry, dry humor moves to the fore in his typically laconic manner.

Most of the tunes are reworked classics with new holiday lyrics: “Somebody Stole My Santa Claus Suit” is a re-written “Somebody Stole My Gal”; “Cool Yule” is based on “Chattanooga Choo Choo”; and “Santa’s Workshop” is really a holiday take of the jug band gem “Beedle Um Bum.” Hicks even reworks his own vintage “Where’s the Money?” into the album’s delightful opener, “Christmas Morning.”

A couple of the tunes – “I Saw Mommy Kissing Santa Claus” and “Here Comes Santa Claus” – are offered pretty much straight up, or at least as straight up as Hicks does anything. In other words, it’s pretty obvious that the egg-nog is spiked, but he sticks pretty close to the way the songs were written without sliding off into a different dimension with ’em.

The real highlight of the disc, however, is a flibberty-jib scat-singing jive-swinging romp through “Carol of the Bells.” Hicks and the Lickettes layer on the harmonies. Hicks slides into a bit of yodeling and some Louis Armstrong graveled growls, too. And even the sped-up Chipmunk voices somehow sounds charming in this context.