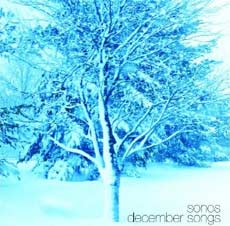 For the first time in many years, I’m not doing a big round-up of all the new holiday music albums. But I am going to pluck three of my favorite discs out of this year’s batch and review ’em.

This is the third and final one of the season. It’s also the best new holiday music album of the year:

Ah, the power and the glory of the unadorned human voice…

The co-ed Los Angeles a cappella sextet Sonos are one of the very best – not to mention, one of the most inventive – of the vocals-only ensembles to have emerged in the current a cappella resurgence, as anyone who was at the group’s Nippertown debut at The Linda in Albany back in October will surely tell you. (Read our review here.)

Following up their stunning “Sonosings” debut CD of last year, the group is back with a holiday collection as their sophomore album, and it’s a wise choice. Even casual music listeners tend to be more welcoming of sans-instruments music during the Christmas season, where choirs and chorales rule the musical roost.

And while they certainly don’t match the more traditionally minded mass-voiced power of the Mormon Tabernacle Choir or the Vienna Choir Boys, the six voices of Sonos add up to much more than just the sum of their parts.

You can hear samples of all 10 of the songs that are collected on this album – from Christmas classics (“O Holy Night,” “All On a Christmas Morning”) to traditional carols (“Greensleeves,” “I Saw Three Ships”) to such stunning original songs as Jessica Freedman’s title track to Ben McLain’s closing “Home.” Just go hear.

This album is so beautiful, so spirited that you won’t hide it away after the holiday season. Really. You won’t be able to wait another 12 months before you hear it again.