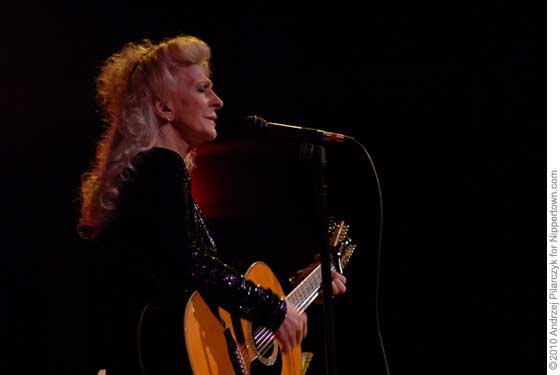 “I can see that there is a return to folk music because there’s a picture of Joan Baez on the cover of tonight’s program,” chided Judy Collins with a tongue-in-cheek smile from the stage. No problem. Judy and Joan are old friends and even sing a duet number on Collins’ latest album, “Paradise.”

Collins and her friend Baez (who performed at the Music Hall earlier this season) are both folk royalty, no matter how you look at it. They were both in the thick of social-political activities back in the turbulent ’60s. And, of course, Collins is still an activist today for the causes that matter and doesn’t have any reservations in telling you about them.

On Tuesday night in the spotlight at the Troy Savings Bank Music Hall, Collins performed with the moxie, humor and the energy of a twenty-something folk darling. And did I mention she’s still stunningly beautiful? It’s hard to believe the woman’s been performing for almost five decades.

At the Music Hall, Collins’ voice was in top form, tackling a wide vocal range of songs drawn from her prodigious career. Whether singing Baez’s “Diamonds and Rust” or John Denver’s “Leaving On A Jet Plane,” her voice soared effortlessly. And on Dylan’s “Mr. Tambourine Man,” her silvered voice possessed a haunting, soul-stirring quality that captivated the near-capacity crowd.

Several false starts plagued Collins’ otherwise stellar performance because of tuning problems with her 12-string guitar. She quipped with a grin, “So many strings, so little time,” adding, “When Ravi Shankar was doing this it was a ‘spiritual experience’ because you didn’t know if he was tuning or if it was another raga.”

In the first half of the concert, pianist Russell Walden accompanied Collins on most of the numbers, but in the latter half of the show, she was all by lonesome playing her 12-string guitar and singing.

She concluded her almost two-hour show with a heartfelt rendition of “Over The Rainbow.” And graciously smiling to the crowd, the 71-year-old Collins finished her 120th concert for the year…so far. 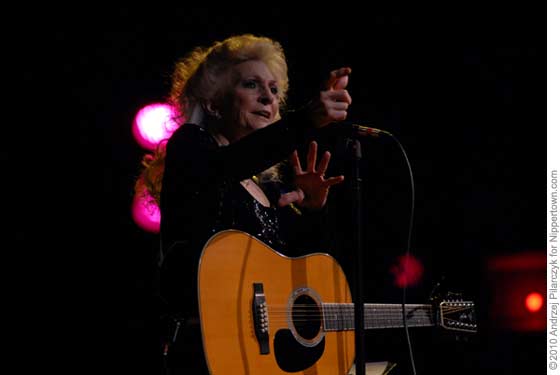