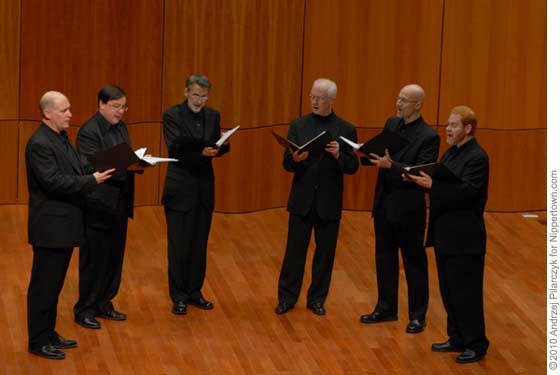 The evening’s program said it all, “Tydings Trew: Feasts of Christmas in Medieval England,” as far as the six-man vocal ensemble Lionheart was concerned. The carols were old, but the performance was new and breathtaking.

The six voices were flawlessly layered in harmonies, covering the Christmas holiday from December 25 through January 6 – but with a twist. The actual start of the choral performance was with “The Annunciation,” meaning, yes, the conception of Christ on March 25.

Who thinks of those nine months prior?

Hmmm, they thought this one out – or should I say, their forbearers thought this one out. Who thinks back to conception when birthdays have been the rage all along? And of course, what is Christmas, but the birth of Christ anyway? Not the appearance of Santa Claus, as some would think.

How was the concert? Well, think monastery monks singing and then some. Was the group spot-on? Absolutely!

Lionheart started out marching and singing from the theater’s lobby down through the crowd to the stage and ended the concert in the same fashion by marching out and singing as they made their way from the stage to the lobby.

Refreshments and a reception with the Lionheart vocalists took place in the lobby following the concert. It was superb all around!

SECOND OPINIONS:
Joseph Dalton’s review at The Times Union
Excerpt from Geraldine Freedman’s review at The Daily Gazette: “They sang with a mellow, rich, blended sound in which each of the singers seems to get inside each of the tones he’s singing. Everything is carefully spun out with exact pitch, little vibrato, pure tone. All phrases are finished. What they created was an atmosphere, a kind of aesthetic of a time long past. They were not above a little stagecraft.” 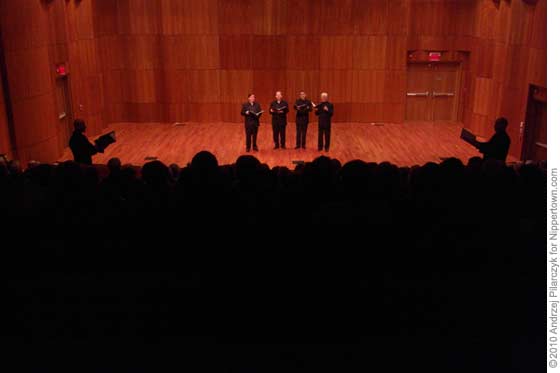