Five Firsts: Geoff Kelley of To Hell And Back 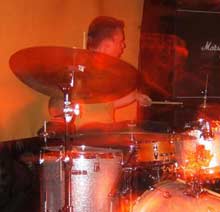 1. THE FIRST ALBUM I EVER BOUGHT WAS … I have vivid memories of listening to a lot of my dad’s records. He had a great collection. I would go from Joe Jackson to King Crimson to Frank Zappa to Led Zeppelin … just tons of great stuff. I know I owned a lot of Hall & Oates and Police singles. But, when I finally pulled together enough birthday money to buy my own LP?? Night Ranger’s “Midnight Madness.” When I close my eyes, I dream about buying a cooler record, but what are ya gonna do…

2. THE FIRST CONCERT THAT I EVER SAW WAS … Huey Lewis & the News at SPAC. I think it was 1983. I just remember sitting in the last row of the amphitheater with my parents and five-year-old brother. The poor little guy had just fallen asleep when someone threw a glass bottle from the lawn that shattered on the floor about two feet from his face. I had a blast, but he’s never been the same….

3. THE FIRST MUSICAL INSTRUMENT I EVER OWNED OR PLAYED WAS … I grew up to the sounds of my dad’s band, the Sharks, rehearsing nightly in my parents’ basement. I would sneak down there and sit outside the room and bang along on a beat-up drum set that I had taped old heads onto. I did take a detour in an effort to follow in Dad’s footsteps and took piano lessons for a few years. But I have just always been a drummer at heart, I guess.

4. THE FIRST SONG THAT I EVER PERFORMED IN PUBLIC WAS … “Sunshine of Your Love” at the Colonie High School talent show. I’d rather not go into it…

5. THE FIRST BAND I WAS EVER IN WAS … Not counting the band referenced above that butchered a classic Cream song, my first band was Horsewater. My friends Scot, Jay, Frank and I listened to a lot of Fishbone, Primus, Mr. Bungle and Bosstones – mashed it all up and made a big mess of it. We had grand ideas, but barely enough skill to pull it off. So, what did we do to mask our deficiencies? Add more horns … real smart. We did do a pretty great cover of Blotto’s ”High School Honey,” though.

Geoff Kelley will slip behind the drum kit to power To Hell And Back at their CD/LP release party at Valentine’s Music Hall in Albany on Saturday. Sharing the bill will be Born of the Yeti, Infidels, Plastic Jesus and Damnation Alley. Admission is $7, and the festivities are slated to get underway at 8pm.