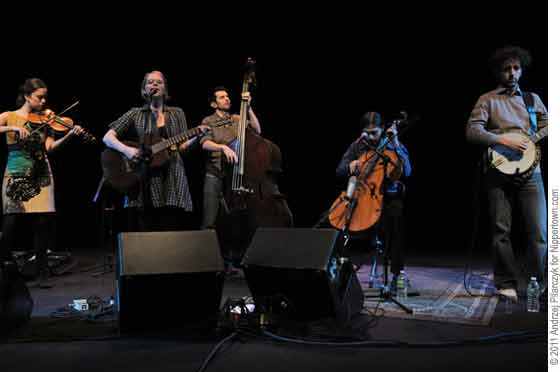 Crooked Still is no ordinary bluegrass band. In fact, they’re not really a bluegrass band at all. Oh, they might look like a bluegrass band – except for Tristan Clarridge on the oh-so-not-bluegrass instrument, the cello – but, in fact, they cut a mighty wide swath across musical genres last Saturday in front of a near-capacity crowd for their third annual tour stop at The Egg in Albany.

The Boston-based quintet served up a little bit of everything: sea chanty (“The Golden Vanity”), pop-rock (the Beatles’ “We Can Work It Out”), murder ballad (“Henry Lee”), Appalachian art song (“Half of What We Know”), folk (“When First Unto This Country”), gospel funk (“Calvary”) and blues (“Ain’t No Grave Gonna Hold My Body Down”).

In addition to the Beatles, they also covered Gillian Welch and Bob Dylan, during their two sparkling sets on Saturday.

But what makes Crooked Still stand out from the rest of the neo-acoustic pack is not what they play, but rather the way in which they play it.

With exquisite arrangements, virtuosic instrumental talents and an emphasis on ensemble playing rather than extended solo work, they somehow manage to bring an undeniable sophistication to the music without betraying its music-of-the-common-people roots. It’s adventurous without ever crossing the line into show-offy. It’s a real tightrope act, and the members of Crooked Still are the Flying Wallendas of the bluegrass world.

There’s a strong element of classical chamber music to their best work – and it’s not just the brilliant cello playing of Clarridge (who is also, by the way, a four-time Grand National Fiddle Champion). Brittany Haas is a damn fine fiddler, but she’s also quite an impressive violinist with superb technique. (Aside: Q: What’s the difference between a violin and a fiddle? A: The violin has strings; the fiddle has strangs…)

Stand-up bassist Corey DiMario added a distinctive jazz feel to his bottom-end work. Vocalist (and sometime guitarist) Aoife O’Donovan brought some lovely and unexpected syncopation to her phrasing, especially on the bluegrass standard, “Little Sadie.” And banjo man Greg Liszt – who was also tapped by Springsteen for his Seeger Sessions Band – is so innovative and imaginative that “Distress” – a sacred hymn revamped with a tricky 5/8 time signature – didn’t sound at all forced or gimmicky in his hands.

O’Donovan is a marvelously supple vocalist, who can effortlessly slip from a whisper to a growl. But if there was one improvement that the band could make, it would be to add more vocal harmonies. When Haas and Clarridge pitched in with vocal support on a handful of the evening’s tunes, the music entered into a whole other dimension. 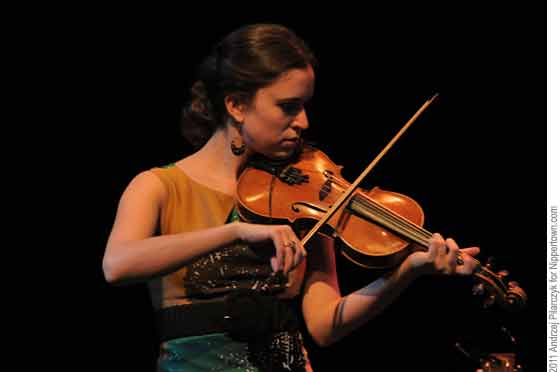 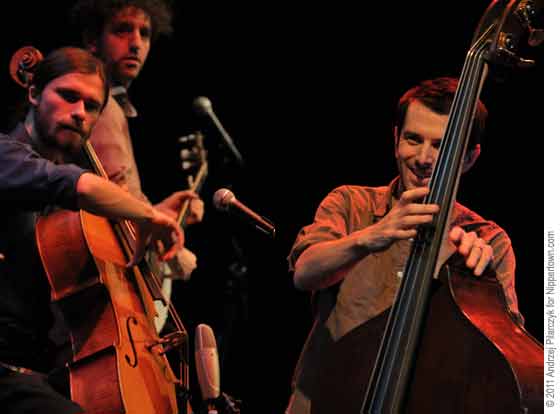