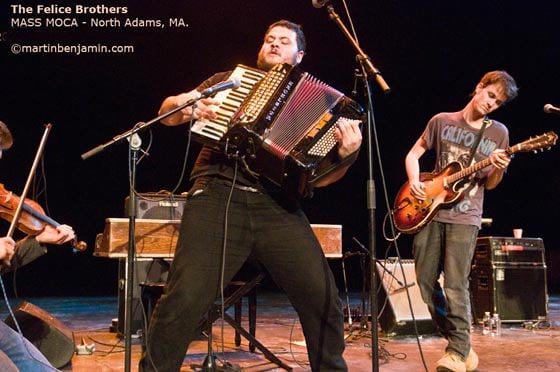 With so many disappointments in our daily lives – from government to banks, lawyers, greed, media, celebrity culture, gun violence and that unsustainable, bad idea of globalization… it is nice to be face-to-face for a couple of hours with an experience that does not disappoint in any way.

Saturday night’s concert by the Felice Brothers at MASS MoCA in North Adams did not disappoint – at any moment for any reason. Louder, faster and more raucous than anything they do on record, it would have been hard to not leave this performance less than totally exhilarated.

It is not just all fun at a Felice show. It gets pretty edgy, too, and it presents some pretty seriously twisted scenarios for you to absorb. Seemingly autobiographical, these songs present some narrations that no one person could have lived through by themselves, nor probably any band of fellows like this group. They simply have great imaginations and stories to tell.

While their songs sound simple on the first listen, one layer below the surface there are all sorts of levels of abstractions and surrealism, even though the band does not have one iota of outward aesthetic snobbishness about them. They are as real as real can be, but they write songs that hit the mark in both conscious and subconscious ways. Their songs resonate, and their live performance did even more so.

God, are they great live. What great balance. Two of them seem like they maybe are drugged to slow down appropriately, while the other three move and play with constant frenetic energy. And how beautiful James Felice’s accordion is at exactly the right moments in so many of the songs.

Between songs, Ian Felice stated, “I can’t believe we sit in our rooms and write these songs, and then people like you come to hear them. That’s amazing.” I believe he really thinks that, and I think it’s part of the magic.

Yes, some think they are like Bob Dylan. Let’s not hang that kiss of death on them. Okay, “The Basement Tapes” come to mind, as does the Band and their way with the blending, layering and colliding of instruments and sounds, with the distinctive and heartfelt vocals and abstract lyrics that changed rock and roll forever. Remember when “Music From Big Pink” sounded like nothing ever before it?

It is probably not a coincidence that the Felice homestead in Palenville, NY is just a short jaunt over Ridge Road to West Saugerties and then a little farther on to Woodstock. With only Levon left there to the south of them, and Bob, Van and Rick departed, these sounds – with origins under the shadow of the Plattekill and Hunter Mountains – take off where the others before left off.

However, make no mistake, the Felice Brothers seem to be the real deal, uniquely their own, reflecting exactly where they come from and the lives of those around them. They are no copycats. These songs and ideas are too good to be copies. And they do not sing about how awful success and a little fame is, like so many musical talents with no ideas beyond themselves do.

About 500-plus fans were treated to something really special at MASS MoCA. They got to live with the Felice Brothers for a couple of hours and hear about the world in real terms – all loud and chaotic – fraught with love, emotion, death, confessions and vulnerability at the same time.

And when the band finally played “Frankie’s Gun,” as their third encore and final song on the night, they torn it down and deconstructed it, thundering through it to such a drastic degree that it was a perfect ending to the evening. The crowd needed no more after that. 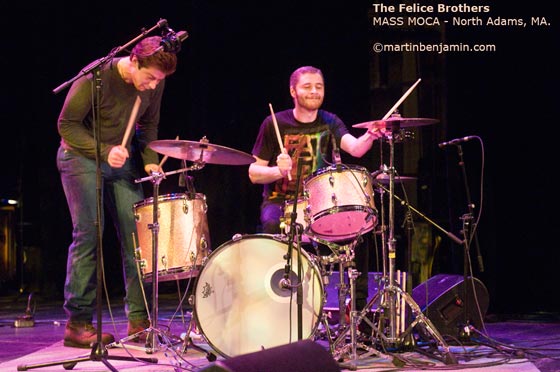 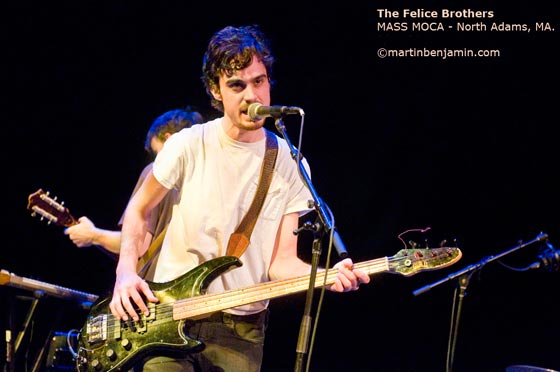