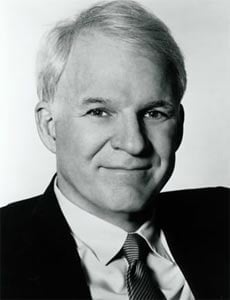 Yes, Steve Martin is coming back to Nippertown for another appearance that doesn’t involve wearing an arrow through his head.

The former kingpin of wild & crazy stand-up comedy is headed into the Palace Theatre in Albany at 8pm on Wednesday, March 30, for a program that’s simply titled, “A Conversation with Steve Martin.”

According to the folks at the Palace, “Martin will talk at length, impromptu, before a live audience. The evening’s conversation will be led by a moderator and will include a Q&A segment where audience members will have an opportunity to engage with one of the greatest entertainers of our time in an enjoyable and intimate audience-interactive format.”

Of course, since his ha-ha halcyon days as a comedian, Martin has become something of a Renaissance man, who has shifted gears to flex his multi-talents as an actor, novelist, playwright, art collector, producer and, yes, banjo player.

You may recall that he fired up his five-string banjo skills for a musical performance at the Troy Savings Bank Music Hall in October, 2009, where the top ticket price was $110.

But at that show, he had to share some of those big bucks with his backing band, the Steep Canyon Rangers.

And let’s not forget his conversation at the 92nd St. Y in NYC in November, which, well, things did not go well. In fact, it prompted an editorial by Martin in The New York Times.

Steve Martin’s latest novel is “An Object of Beauty,” a satirical morality tale set in the contemporary art world.

Soooooo… who would you like to see as the moderator for the conversation with Steve Martin at the Palace?

Bryan Adams, What Was the First Album You Ever Bought?