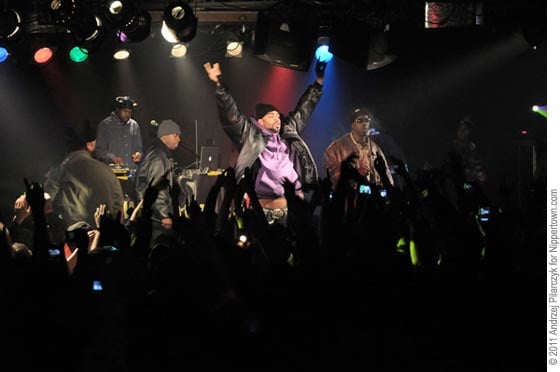 A few weeks ago, The Village Voice polled a group of well-known (but anonymous) music writers to find out how many could correctly identify all nine members of the Wu-Tang Clan.

Thirteen out of 14 critics could name at least six members of the pioneering New York City hip hop collective, though. Hey, that’s not too bad.

At Northern Lights in Clifton Park last Thursday – a show rescheduled from December 27 due to a snowstorm – the number of Wu-Tang Clan members present was six.

Seventeen years and a gazillion solo projects later, you can’t expect them all to be there.

Pivotal Wu-Tang member RZA, who produced the majority of Wu-Tang’s albums and many of the group’s solo efforts, was off filming a kung-fu movie, “The Man with the Iron Fist” (fitting for an artist so influenced by samurai mythology).

Rapper Ghostface Killah, originally slated to be on the bill, had a prior commitment and couldn’t make the re-scheduled date, which was the last on Wu-Tang’s winter Rebirth tour.

Shouts of protest erupted from the line outside Northern Lights when concert-goers – who paid $40 for their tickets – saw a sign warning them of Ghostface’s absence. (Few, however, seemed to take the club up on its offer to buy back tickets from disgruntled fans.)

His son, Boy Jones, represented for him instead, wearing his hair in ODB’s akimbo braids and a t-shirt emblazoned with an image of his father’s public assistance ID card (the cover from ODB’s classic “Return to the 36 Chambers” album).

Even with only six of the original MCs onstage – along with “unofficial tenth member” Cappadonna – the stage looked crowded and overflowing with almost too much talent, as the crew opened with well-known songs from their brilliant “Enter the Wu-Tang” debut album: “Clan in Da Front,” “Shame on a Nigga,” “Da Mystery of Chessboxin,’” and “Wu-Tang Clan Ain’t Nuthing ta Fuck Wit.”

In the absence of key members, Method Man – wearing a black t-shirt and black skull cap – stepped up to fill the void, putting in some of the most spirited vocal performances of the night on his calling card “Method Man” and during an on-fire version of “Bring the Pain.” At one point he even surfed – or rather stood – on top of the crowd.

“Good shit, Albany, good shit,” Method Man said after Raekwon’s “Ice Cream.” Has a song made better use of a food-sex metaphor in modern times?

The crowd – packed in pretty tight for a show that a club representative said had sold out – ate it all up. They didn’t even seem to mind that their location was misidentified all night (Clifton Park, trading up!).

A version of the O’ Jay’s “Family Reunion,” a set highlight of “C.R.E.A.M.” (“Cash Rules Everything Around Me, Get the Money”) and a tribute to ODB – with doppelganger Boy Jones pulling off ODB’s signature “Shimmy Shimmy Ya” – closed out the encore-less show.

One of the MCs on stage then invited all the ladies in the crowd “willing to leave their men behind” to an after party at the Marriott, to the consternation of Method Man.