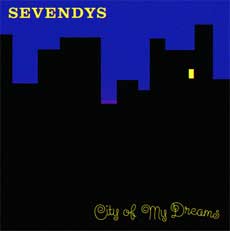 Nippertown’s own Jed Davis had a very busy year in 2010, and 2011 shaping up to be equally fruitful already. Keyboardist-vocalist Davis is working on a new band, the Sevendys, with drummer Sheridan Riley and guitarist Avi Zahner-Isenberg, both members of the Sub Pop recording artists Avi Buffalo.

The Sevendys are interested in transforming the recording process into an adventure by visiting some of America’s most legendary studios like Muscle Shoals, EastWest or Ardent. “Studio recording is arguably a dying art, and in the past decade classic studios have been disappearing faster and faster,” Davis says. “As we brainstormed potential destinations, I thought about how each studio represented a time, a region, and a sound. I began to categorize newly-written songs by appropriateness for a particular studio. A tune that might lend itself to lush sonic experimentation would get earmarked for Dreamland. Something basic, grooving and soulful, for Muscle Shoals.”

They decided to make their first recording journey to SugarHill in Houston. Originally known as Gold Star, it’s the oldest continually-operating studio in the United States. As Davis says, “The air in that room has gotten shook up by all manner of hillbillies and bluesmen, by the Big Bopper and the 13th Floor Elevators. SugarHill isn’t synonymous with a sound, but the studio’s output represents a spectrum of styles that are all genuinely American.

“All across the country, musicians of generations past – the veteran musicians who helped to develop their region’s signature sound – are still kicking around and quite vital. As a guitar/keyboard/drums trio, we lack a bassist, so that’s great for us… a local bass player can be our wild card, Our trip to SugarHill went better than we could have imagined: the Texas bassist we drafted into Sevendys was Chuck Rainey.”

The great veteran bassist Chuck Rainey has recorded with everyone from Louis Armstrong to Aretha Franklin to Steely Dan.

The first Sevendys single – “City of My Dreams” and “I Hate Love” – is now up online The basic tracks were recorded live to tape with Chuck Rainey, as well as a local choir and a pair of Houston horn players, Martin Langford and Eddie Lewis.

“Our original plan was to go in all Texas,” Davis explains, “but once Chuck got involved, we ended up kind of Memphis instead.”

Here’s a short video clip of the Sevendys warming up in the studio:

The two tracks by the Sevendys can be downloaded for a name-your-own-price (and, yes, free is an acceptable price); they also come with a t-shirt for $10.

“We also recorded a second single while we were in Houston, which will be released in March on a 7-inch vinyl single from an LA label called JAXART,” Davis reveals.

But the Sevendys are already forging ahead with the next stop on their tour of America’s Great Recording Studios tour. Next month, over President’s Day Weekend, the band (with Chuck Rainey in tow once again) are headed to Los Angeles, where they’re booked into EastWest Studio Three, where the Mamas & the Papas recorded and where Brian Wilson and the Beach Boys created “Pet Sounds.”

Stay tuned for the full report…